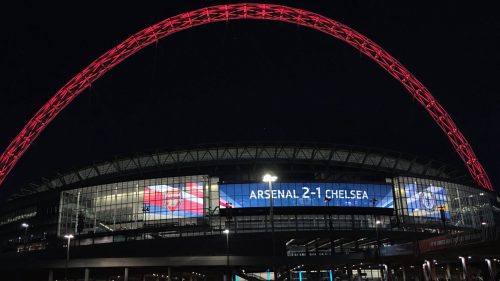 When Arsenal took to the field for the FA Cup final against Chelsea on 22 May, it was the Gunners 51st appearance at Wembley. This meant Arsenal pulled further away from Manchester United who have appeared 49 times. As of the end of 2019-20, Tottenham have played 78 times at Wembley due to having played 54 “home” games there for two seasons whilst their new ground was being built. It’ll take a few years but we will eventually reclaim our record.

Arsenal played at the original Wembley Stadium 41 times which is a record that cannot now be taken away from them.

The full list of games played by Arsenal at Wembley are:

Arsenal’s complete record at Wembley is as follows:

The record for most appearances by an Arsenal player at Wembley is 24 held jointly by Tony Adams and Nigel Winterburn. Including his international appearances, Adams appeared more times at the original Wembley Stadium than any other player.

Reg Lewis has scored more goals than any other Arsenal player at Wembley with a grand total of six – four in the Football League Cup (South) final in 1942/43 and two in the 1949/50 FA Cup final.

9 thoughts on “Arsenal’s record at Wembley”