Anyone who saw David O’Leary play would agree that he was one of the games calmest players who very rarely lost his cool. The only game that I can remember him coming close to being sent off was when he broke George Armstrong’s appearance record against Norwich on 4 November 1989. He was involved in a running battle with Martin Allen who seemed intent on provoking O’Leary to react, a tactic that almost worked as the Arsenal man was booked.

However, the day that O’Leary saw red is barely remembered because it was witnessed by about 400 people at Loftus Road in a reserve game against QPR on 17 March 1992. Those that were there witnessed a fairly run of the mill second-string game until the final 15 minutes. 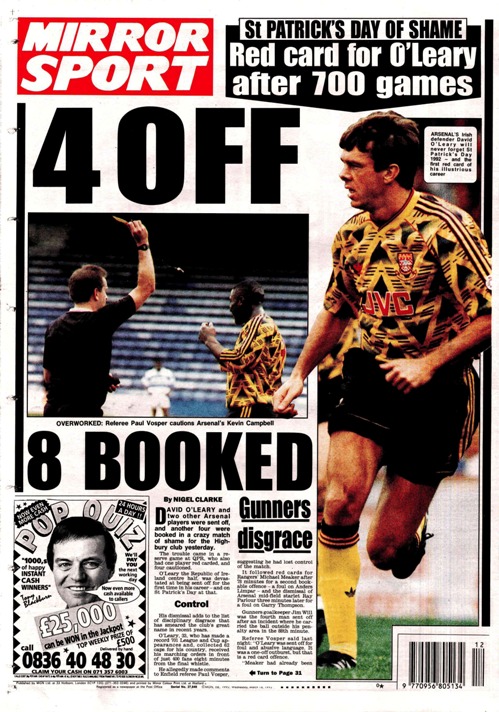 The referee was Paul Vosper from Enfield, I can’t say for certain but I vaguely remember him being one of those referees that made you roll your eyes when you saw his name in the list of officials. He certainly made a name for himself in this game.

With less than 15 minutes left on the clock Arsenal were cruising to a relatively easy 3-1 win that would put them top of the table, three points clear of Southampton. Kevin Campbell opened the scoring in the second minute but David Macciochi equalised eight minutes before the break. Arsenal regained the lead after 52 minutes when Ray Parlour volleyed home a rebound from Campbell’s blocked shot. Campbell scored his second, from the penalty spot following a foul on Mark Flatts, after 76 minutes.

It looked like the points were in the bag when QPR’s Michael Meaker picked up a second yellow for a foul on Limpar on 78 minutes. Three minutes later the numbers were evened up as Ray Parlour was given his marching orders for a cynical foul on Garry Thompson. By this time Vosper had also booked four Arsenal players (Campbell, Marshall, Dickov and Flatts) and three QPR players (Thompson, Simon Barker and Tony Witter).

At this point O’Leary, being the most senior player on the pitch, decided to have a word with the referee and suggested that he needed to calm down as he had lost control of the game. This was obviously too much for Vosper’s ego as he produced another red card and sent the Irishman off for the only time in his career.

This wasn’t the end of proceedings, though. With two minutes remaining Will handled the ball outside the penalty area. He didn’t think he had and, rather stupidly, gave the linesman an earful of abuse. He too was sent off and Pal Lydersen took his place in goal for the remaining few minutes.

Four red cards and seven others booked. It’s very rare for a reserve game to hit the back pages but the Daily Mirror lapped it up. They went for it big time with the traditional broken crest and then a précis of Arsenal’s recent (and not so recent) misdemeanours. 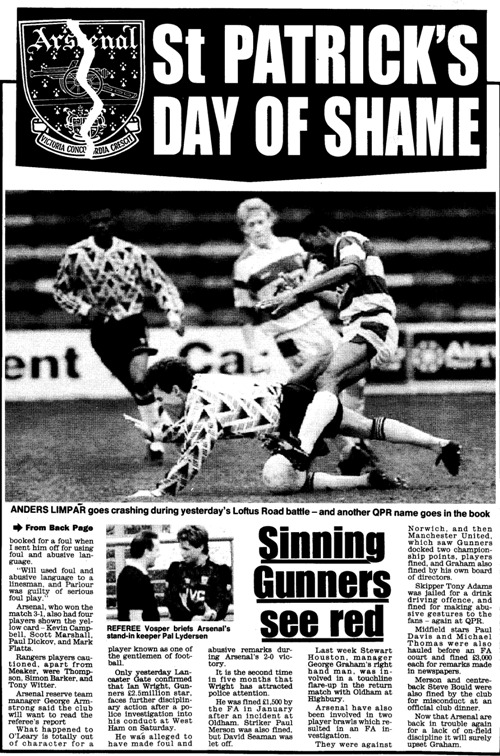 Arsenal, through reserve team coach George Armstrong, made their views clear to the FA about Vosper’s officiating. But this was to no avail as all three players that had been sent off had to serve bans – O’Leary three games, Parlour and Will three games each. On top of this, three defeats in the next five games saw Southampton leapfrog Arsenal to win the Neville Ovenden Combination. 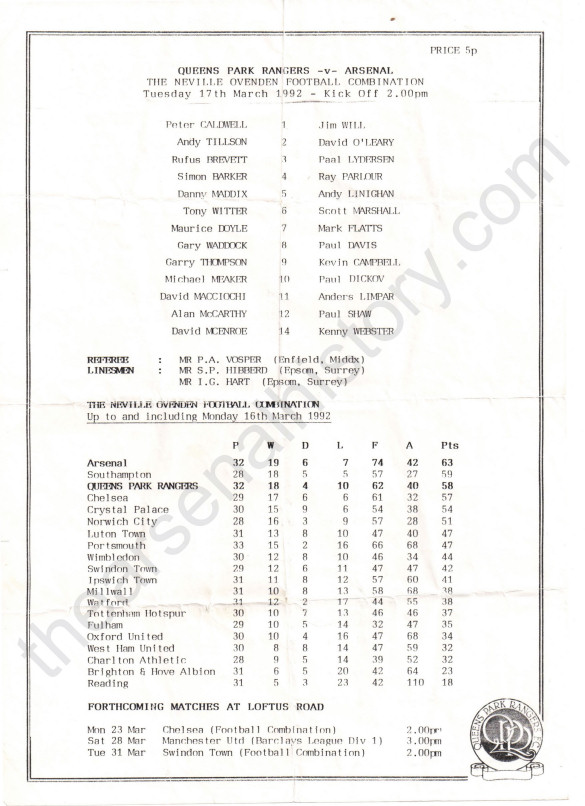