The Arsenal History recounts a classic, no holds barred, encounter between the North London rivals.

At about the same time as the Victorian age gave way to the Edwardian era Tottenham took over from Millwall as Arsenal’s main rival. Millwall for their part had taken over from Chatham about 10 years earlier. Evidence of antagonism was noted between 1900-4 at the Manor Ground against Spurs, many years before the move to Highbury, in the The Crowd at Woolwich Arsenal

Indeed we are working on a theory, and it is just a theory as there is little concrete evidence at present, that the move to Highbury was a deliberate ploy by Henry Norris and William Hall aimed at engendering a fiercer rivalry to exacerbate the one that had already taken root prior to 1913.

However that conjecture is not what this article is about but about an incident in 1922 which appears to have been the first evidence since the move, of visceral dislike manifesting itself in a game between the respective North London and Middlesex teams.

Forget 1919 and the election of The Arsenal to the top division, there is little contemporary evidence that Spurs were unduly annoyed that The Arsenal gained a path to the First Division via Norris and Hall’s supreme charisma and contacts within the higher echelons of the game. It was on Saturday 23 September 1922 when the rivalry notched up a level, where the violence on the pitch affected the terraces and led to an investigation by an FA commission.

The match was played at White Hart Lane in front of 40,000 spectators and within 20 minutes Spurs’ forward “Fanny” Walden left the field with a muscular leg injury and Spurs played on with only ten men. As he was a particular favourite of the Spurs crowd this accentuated the bad feeling that built from the start as Arsenal, with continual long balls out of defence and an agricultural approach to the game, led to much abuse from the Middlesex section.

Spurs were down to nine men for about five minutes slightly later when Alex Lindsay was fouled by Arthur Hutchins. Again the crowd were incensed and then a third player, Bert Smith was badly fouled and the home support became more and more vituperine towards the Reds’ players, but at this point the referee had a grasp of the game. Bert Bliss, too, fell prey to injury just before the whistle and played almost all the remaining game with a pronounced limp.

The teams went into the break goalless, but within five minutes Arsenal scored through Reg Boreham after a pass from Jock Rutherford. The Spurs crowd were again up in arms when the referee had to have stern words with Frank Bradshaw for hacking down Jimmy Dimmock. Curiously there appeared to be little retaliation on the pitch as Arsenal appeared intent on deliberate provocation in what was described in the Sunday Times as a “discreditable exhibition”. A ‘stop your man at any price’ policy was surely instilled in the players by manager Leslie Knighton, who was looking for his first away win against Spurs; and The Arsenal’s first away win of the season having lost all three up to this game.

Tottenham were by far the better team on the day but a combination of bad luck and poor finishing in front of goal, and a likely fear of the consequences of mixing with a steely and “rough“ opponent ensured that the second goal went to Arsenal in the shape of Boreham who ran and shot firmly past Herbert Blake in the Spurs goal with only ten minutes remaining.

With time almost up Lindsay scored a dubious goal which appeared at first to have been ruled offside, but when it became apparent the referee had given it, Stephen Dunn the Arsenal goalkeeper rounded on the referee, Mr C Austin, shaking him and behaving “like a man demented.”  Unbelievably, Dunn remained on the pitch but the goal stood and the tempestuous nature continued as, amidst Arsenal’s protests to the referee, Arsenal’s Alex Graham punched Spurs’ Smith.

Indeed, the Sunday Evening Telegram commented: “after the Spurs goal came the most disgraceful scene I have witnessed on any ground at any time. Players pulled the referee, blows with fists were exchanged and the dignity that appertains in the referee was rudely trampled on”. The highly charged White Hart Lane crowd, not content with influencing the referee for their goal, remained a threat at the ground, but any thoughts any had to get to the Arsenal players after the game were stopped by the police presence.

Prior to the return fixture, on 28th September it was reported in the Islington Gazette that the FA had appointed a commission to deal with reports affecting the conduct of the players at the match on 23rd September.

So, as was the custom in the years after World War 1, the return game was played at Highbury the following weekend with the realisation that the authorities and the press were keeping a very close eye on both clubs. This game drew a season record crowd of 55,000 to Highbury, no doubt hoping for a repeat, but it was a muted affair which was won 2-0 by Spurs, who had to re-jig their forward line because of the injuries inflicted by Arsenal in the previous week. In the match day programme ‘Gunner’s Mate’ blamed the Spurs’ crowd for the uproar at the end of the first game, adding that items were thrown from the crowd at Arsenal’s Billy Blyth and Bradshaw.

The FA took no chances of a repeat of the aggression and violence and replaced the referee Mr Austin, with Mr W E Russell who allowed no player any leeway and, as the authorities planned, this match ended without undue incident and even in a friendly manner as the two captains shook hands at the final whistle.

In the afternoon of Thursday 5th October 1922 the aforementioned FA Commission of Inquiry convened at Russell Square. Sir Henry Norris, William Hall, Charles Crisp, Jack Humble, Leslie Knighton, most of the Arsenal players and all their equivalents from Spurs were required to attend and many gave evidence. However there is no mention of Mr C Austin appearing at the inquiry, despite him being heavily implicated in the events, and being replaced for the second game. 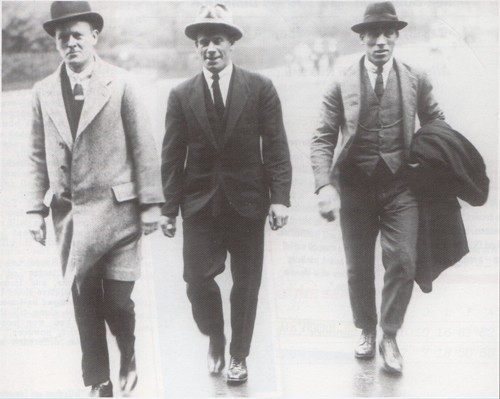 Following the evidence the FA made the following recommendations within their report:

Smith of Spurs was found guilty of using ‘filthy language’ towards Graham and was suspended for a month. Graham was censured for retaliating and taking matters into his own hands instead of informing the referee; and Dunn, was also censured for his behaviour after Spurs’ goal had been allowed to stand. The Arsenal players’ conduct at the end of the game was explained to some extent by the FA as they found that the referee did blow his whistle for offside before changing his mind, swayed by the home crowd. Spurs were warned about the behaviour of their crowds, as they had influenced the referee’s decision-making, and were left in no doubt that any repeat would lead to ground closure.

So Arsenal had kicked Spurs off the pitch, punched an opponent and manhandled the referee, yet it was Spurs who had a player banned for swearing and they received an official warning about their crowd’s behaviour. It appears that Arsenal did not just win the game but the inquiry also!

The Pride of North London by Bob Goodwin,