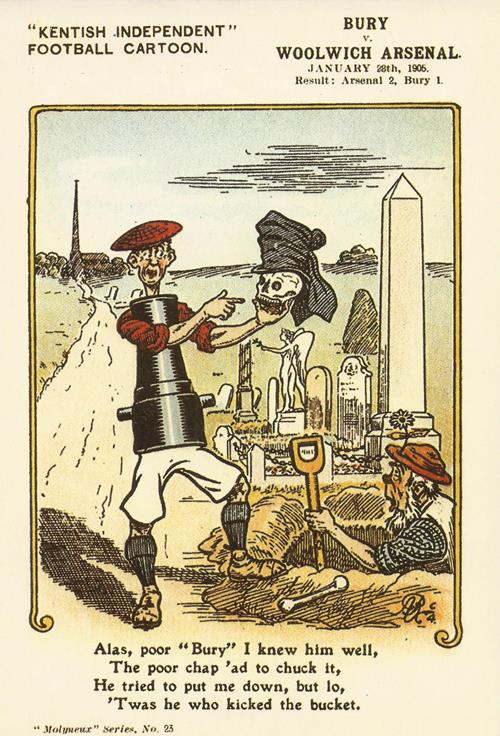 The game was played at the Manor Ground in front of 20,000 and Woolwich Arsenal’s leading scorer for this season, Charlie Satterthwaite, scored a brace, one in each half, to ensure the 2-1 victory.

The cartoon is a strange amalgam. Firstly a normally attired Redshirt appears as Shakespeare’s Hamlet, with the Bury skull as Yorick. Underneath the picture is a Pam Ayres style poem with the first line probably knowingly mis-quoting the famous line from the Danish play.

Redshirt is on a road and comes across a graveyard which has a freshly dug grave, ready to inter the bones of the Bury football club after their defeat at the hands of Redshirt. The grave digger is a strange dog-faced yokel and this odd looking fellow appears in other cartoons within the series as different characters, always in a roadside situation.

It is likely that the burying image was made in wider knowledge that it was likely that Bury were candidates to be relegated. Bury indeed did get relegated and at the time of this match were in 13th position and it was a match Arsenal, though upstarts in the top division, were expected to win.

This is a very important game linguistically as it is the first time an accusation of hooliganism by the Arsenal crowd was made as a headline in Woolwich. The word hooligan did not enter the English language until 1898, its origins are not entirely clear but the meaning is obvious.

An incident occurred when the Bury keeper claimed a stone was thrown at him from someone on the Spion Kop. The referee stopped the game, spoke to the crowd and inititiated a search for the missile by players and officials, however nothing was found at the time and the referee did not report the incident to the Football Association.