As we all know, Arsenal played their first ever game on 11 December 1886 as Dial Square against Eastern Wanderers, right? Well, it depends on which version of the club’s history that you read.

For example, the club’s official history says this: 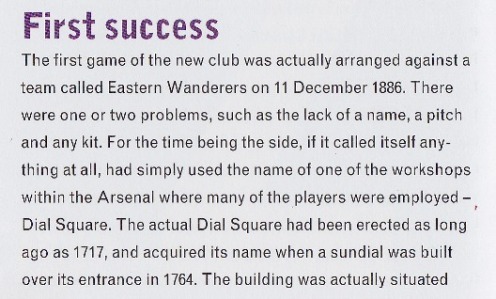 To me, this says that the club may not have had a name when they played that first game. Then, if you look at the Arsenal handbook from 1935 it says this: 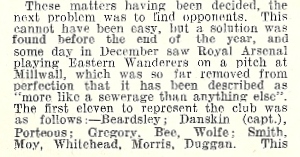 The date is a bit grey but the name is given as Royal Arsenal. But a mere three years late the history in the handbook has moved the date of the first game to September! 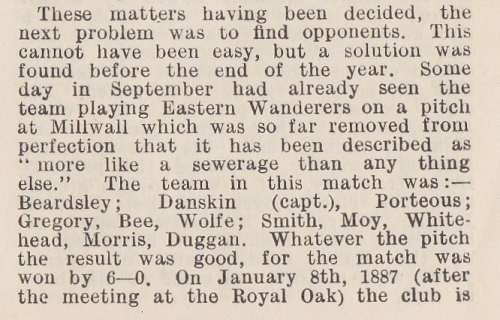 Having discovered some other discrepancies with the recorded history of the club over the last few years Mark and I were a bit sceptical about the date, the name of the club and the venue. Even more so when you realise that no history of the club has published a contemporary source for this game, all they’ve done is copied an article written in a book in 1905 and the handbooks.

What we really need is a match report from December (or September) 1886 to confirm the name of the club and the date. In the early 1990s when I first started visiting the newspaper library in Colindale I thought this would be simple: find a newspaper from December 1886 and look at the football results. How wrong I was. 20-odd years later I was beginning to believe that Thomas Edison was wrong about each failure being a step closer to success. I had gone through pretty much every national, regional and local newspaper and not found any mention of the game. It appears that a works football team playing their first game  just wasn’t newsworthy.

Then Mark found something that started a chain of events that led to the holy grail. His find was a team picture from 1905 in the Kentish Independent. It wasn’t the team group that was interesting but an advert for a Woolwich Arsenal handbook. We had been led to believe that the first handbook had been published in 1914 but this advert proved otherwise. We then started to look for this handbook but were unsuccessful. However, we found a much earlier handbook. This didn’t mention the game against Eastern Wanderers but it did mention a local newspaper that we had never heard of before. It was something of a goldmine for information from 1890 onwards but nothing before this. However, it did print the following in December 1911:

This made me sit up as it was pretty exact and only 25 years after the game. Then things became very interesting. This paper, in 1890, made a number of references to another paper called The Scottish Referee. Looking through the newspaper catalogue I noticed that there were a number of regional variations, and one published in London simply called The Referee. So, in February of this year I went to Colindale and ordered the 1886 microfilm for this paper. Zooming through to the 12 December edition I found this:

Positive proof of Arsenal’s first ever game. The game was played under the name Dial Square, it was played on 11 December 1886 and Dial Square won 6-0. This simple match report was published, for the first time ever, in the Arsenal programme for the game against Everton on 8 December 2013.

BUT, there is more to this first game and the events over the next few weeks. All of which will be revealed in our forthcoming book, Royal Arsenal – from the Common to the Manor, which will be published next year. We will tell the real story of Arsenal Football Club’s formation and its story until it was forced to change its name and ground in 1893.