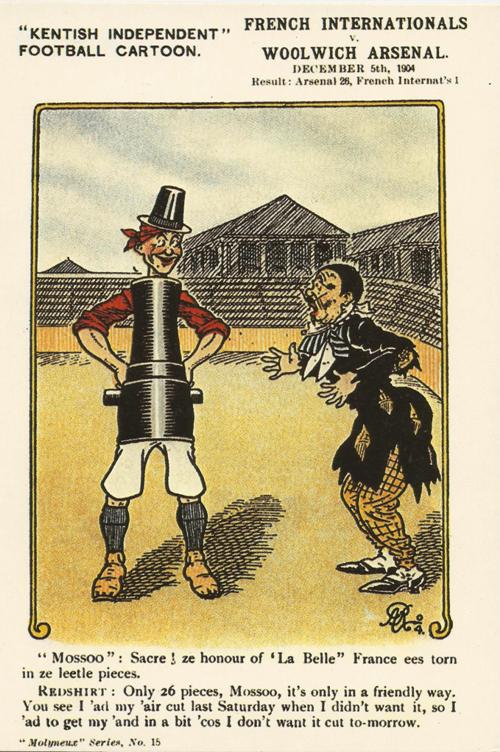 Yes we did fleetingly write about this game only last week, and that can be seen here with a full report of the game Arsenal’s biggest win: 26-1 The French Pantomime.

But, as it is one of the games included within the postcard series, it was felt fitting that we include the largest ever first team win, 26-1, on the same date as the club played their first game.

Many events occurred in between and, most from 1893 onwards, are recorded in the book we wrote with Tony Attwood:  Woolwich Arsenal: The club that changed football.  As Christmas is nearly upon us…

However the club had moved so far forward that they could field many reserves while playing an “international team” almost 18 years to the day of their initial outing and thrash them so resoundingly in a game where Jimmy Ashcroft, the goalkeeper, only touched the ball once in the second half.

The French fellow cuts a dishevelled look, having had his hat removed and outfit cut to ribbons by Redshirt and he could not even afford some gentleman’s gloves.  Also in the background are the workshops of the Royal Arsenal ordnance factory where so many of the supporters of the club worked, which were just behind the West terraces of the Manor Ground.

A full 3,000 turned up for this Gallic fiasco on a Monday.