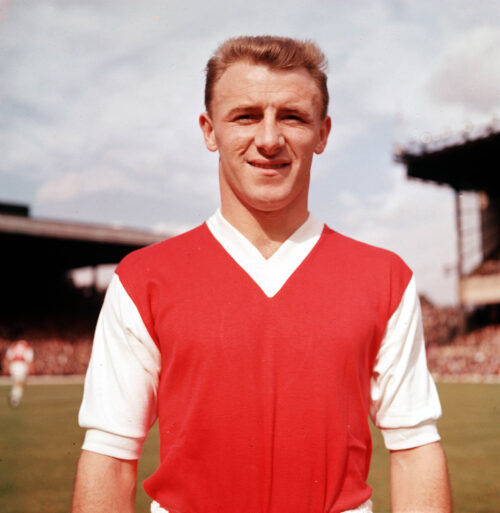 An irrepressible character, Tommy Docherty joined Arsenal for the highest player fee the club had paid to that point. Quickly becoming a central and highly popular figure in the team he left a few years later to embark on a long nomadic management career for an eye watering list of sides.

Born on 24 April 1928 in the Gorbals, Glasgow he joined Shettleston Juniors prior to getting his call up for National Service in 1946. With the Highland Light Infantry his performances for the British Army football team ensured he came to the attention of many clubs. Docherty joined Celtic professionally in July 1948 but after nine first team games was transferred to Preston North End in November 1949 for a reported £4,000. After almost 350 games at Deepdale he requested a transfer in the summer of 1958, around the same time as George Swindin took over the Arsenal reins with a remit to reinforce the ailing Gunners side. 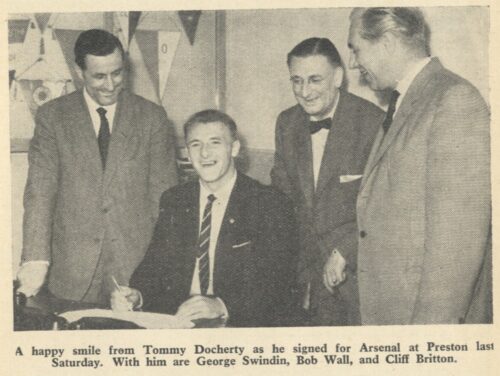 Arsenal’s opening game of the 1958-59 season was at Preston North End, and just prior to the game Swindin swooped to sign wing half Docherty on 23 August 1958 for £21,000. This figure was then Arsenal’s record for a single player. Three days later he made his debut at home to Burnley becoming the 470th player to appear in Arsenal’s colours. In this 3-0 win he scored his only goal for the Gunners as his fiercely driven shot cannoned onto a Burnley defender wrongfooting the keeper in the 58th minute for the second goal of the night.

A hard tackling rugged destroyer who could run all game, he not only excelled as a defender but could turn defence into attack with clever passes when required. Indeed in November 1958 no less a judge than Joe Mercer claimed Docherty was the best right half to have played in the English league since football resumed after World War Two. 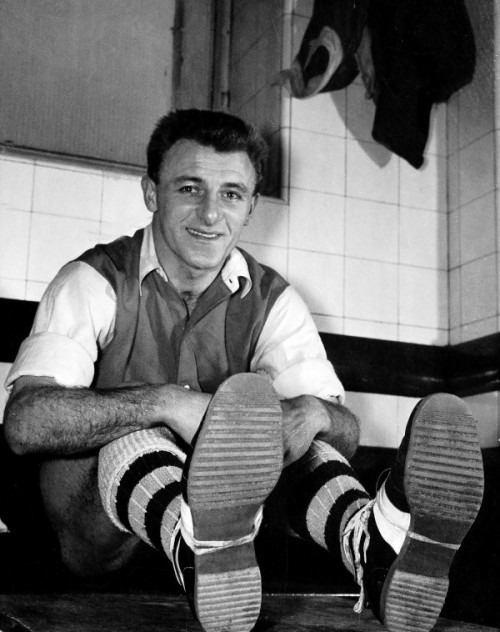 The story behind this photograph of The Doc in crepe boots is an intriguing one which occurred during a cold spell in January 1959 as league leaders Arsenal played Colchester in the FA Cup and can be found in this link to: Arsenal, Teddy Boy Boots and a siege. Additionally, just after this image was taken he began serving a two week ban from the FA, for a string of obscene remarks aimed squarely towards the referee at the close of the Boxing Day game at Luton in which Arsenal were beaten 3-6!

Tommy broke the tibia in his left leg on 17 October 1959 on the Highbury pitch versus Preston, in an accidental  collision with colleague Bill Dodgin as the latter went for the ball in the 20th minute, but caught Docherty’s lower leg instead! Taken to the Royal Northern Hospital he was immediately operated on and his leg put into plaster. The doctors forecast a very long lay off but Tommy insisted he would be back by Christmas and through hard work and persistence he almost made his self-appointed timescale. A return for the reserves on 2 January 1960 at Portsmouth was a good run out before making a first team comeback a week later in the FA Cup tie at Rotherham.

Already a seasoned Scottish international, when he joined Arsenal, he made his final three appearances for Scotland while at Highbury. In all he gained a total of 25 caps between 1951 and 1959, which included a couple of appearances in the 1954 World Cup finals, and eight as captain.

After 90 first team appearances, a solitary goal, and four reserves games he left Arsenal on 9 February 1961 to be appointed player/coach at Chelsea. The Doc had only good words for Arsenal as he left the club, making the following comment:

“I want to thank them very much. It was typical of the way they treat their players to release me for this job when they could have got a fee for me.” Daily Herald 11 February 1961.

He became the Blues manager a year later replacing the 1930s Arsenal striking legend Ted Drake, leading Chelsea to their first League Cup win in 1964-65 and putting together a talented squad, including Peter Osgood, Chopper Harris and Peter Bonetti, before resigning in 1967.

He then went on a remarkable merry-go-round as manager of the following clubs: Rotherham 1967-68; a very short lived QPR stint in 1968; Aston Villa 1968-70; Porto 1970-71; briefly assistant to ex-Arsenal colleague Terry Neill at Hull City in 1971, before becoming Scotland boss in 1971-72, of which he said his biggest regret was leaving this berth as his country’s manager. However Manchester United called and between 1972-77 he spent an ‘interesting’ and controversial period at Old Trafford covering relegation, promotion and FA Cup victory before being sacked and subjected to various salacious terrace chants over an affair with the love of his life. Derby* 1977–1979; Queens Park Rangers again 1979-80; Sydney Olympic 1981; Preston North End 1981; South Melbourne 1982-83; Sydney Olympic again 1983; Wolverhampton Wanderers 1984-85 and Altrincham 1987-88.

Whereupon he embarked on a successful career as an after-dinner speaker and media pundit, due to his engaging nature, ready wit and ability to produce classic one liners. This much loved football figure had become the oldest living Arsenal player, before he passed away on New Years Eve 2020, aged 92.

* As an aside the second game MA went to Highbury in December 1978 was against the Docherty led Rams. Arsenal won 2-0 on a bitterly cold afternoon.