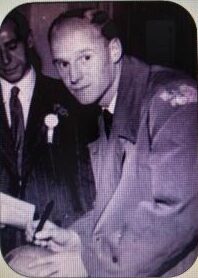 John Ollerenshaw was a post-World War Two addition to the club, who made a couple of first team appearances during the transition wartime season, but unfortunately for John these games are not classed as first class matches. Thereafter, he appeared almost exclusively for the ‘A’ team.

The photo above shows him signing a football at the 1950 FA Cup final – he was present as a player in the crowd, claiming the experience of all the club going to the game collectively and the celebrations afterwards at the Cafe Royal were best of his football life.

Born on 3 April 1925 in Stockport, John made one wartime appearance for Manchester City during the 1944-45 season. While linked later with Bolton Wanderers he was asked to trial for Arsenal in the summer of 1945. He took part in an Arsenal practice match designed for amateurs from all over the country on 18 August 1945 at Highbury, and impressed enough to be taken on after the game by George Allison.

During the war he was in the Home Guard in 1944, and was called up for National Service in September 1945, a few weeks after being signed. He spent most of his time in the army with the Royal Electrical and Mechanical Engineers (REME) before demobilisation in May 1948.

Ollerenshaw made two wartime first team appearances for the Gunners in the 1945-46 season: a friendly on 2 March 1946 at Fulham and on 6 April 1946 at home to Southampton in the Football League South – but did not appear for the first team again. Rather unluckily he was a full back at a time when the club had a surfeit of top notch performers in the same position, namely George Male, Laurie Scott, Walley Barnes, Lionel Smith and Joe Wade. 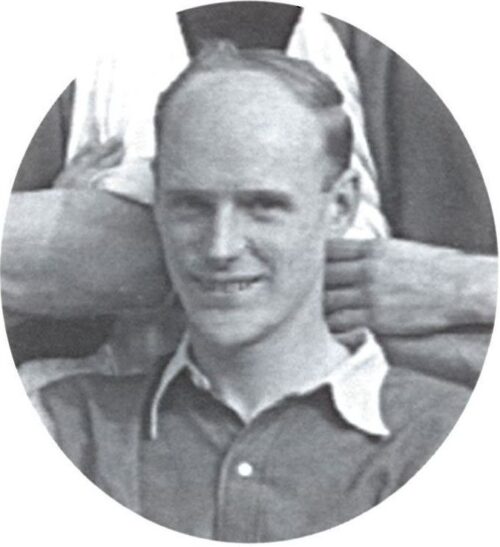 Arsenal signed him professionally on 9 September 1946 and whilst at Arsenal he was involved mainly in the ‘A’ team but also made four reserves appearances in the five years at Highbury. John also played for the Arsenal FC cricket side alongside Leslie & Denis Compton, Arthur Milton, and Jimmy Gray. In addition to his two first team appearances John played a further 71 games for the reserves and ‘A’ team.

Obviously down the pecking order with many defenders in front of him he requested a transfer and despite having been offered a role at Brighton, he moved to Hartlepools on 6 June 1950. Living in Hyde, Manchester he negotiated to train at Stockport County during the week only going to the north east for match days. However, he did not settle and after only two starts for the ‘Pools requested a transfer in January 1951, whereupon he left for Oldham in mid-March 1951.

A very keen golfer John and his wife, Phyllis, were joint captains of Romiley Golf Club in 1981 and at one point he played off a handicap of four. He was seen on the Romiley course until his late 80s!

John Ollerenshaw, a lifelong Arsenal fan who was rightly extremely proud of appearing in the red shirt and white sleeves, died on 12 July 2020, aged 95.