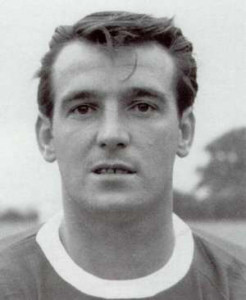 A quality winger, who was the 481st first team player, he made over 150 appearances for the Gunners, and then post-playing he was a great business manager for Yeovil.

Born on 23 January 1939 in Bath, Somerset. A Somerset youth player he played at junior side West Twerton Youth Club, before getting on the Bristol City ground staff, and then into Bath City reserves in 1956. Moving into the first team still a teenager he was bombing down the wing for Bath City at the same time as serving his National Service as a private in the Royal Army Pay Corps. Skirton caught the eye of a number top flight teams during the 1958/59 campaign – Chelsea, Blackpool and Newcastle as well as Arsenal were all keen on him. But George Swindin and Ron Greenwood won out, primarily as Skirton wanted to play for the Arsenal, and they signed him on 20 January 1959 for £5,000.

He made a few reserve appearances but in February 1959 had a serious bout of pneumonia, was hospitalised for a month, contracted TB and did not play for the rest of that season, nor the next. Which was a huge shame as not only was he was earmarked for the first team forward line almost as soon as he turned up at Highbury, but missed out on the friendly, arranged due to his transfer, against his old side at the end of April 1959. Eventually the strong, pacy and talented winger, who was built like a centre forward, made his competitive debut on 20 August 1960 at Turf Moor in a 2-3 defeat to Burnley. Initially an outside right he moved to the left wing after the purchase of Johnny MacLeod, and then with the emergence of Geordie Armstrong he played on both wing for the Gunners, as required.

In the 1961/1962 season, Skirton was the club’s top scorer, with 19 goals in 40 appearances. Also in this season over the Christmas period Alan scored a rocket giving the Gunners a well received Highbury victory over the Spurs double team in a 2-1 league win – a scant highlight in this dark era for the Gunners. Two seasons later he became the first Arsenal player to score a European goal at Highbury on 22 October 1963 against Staevnet in the Fairs Cup.

He was part of a bizarre sequence as Arsenal missed six penalties on the spin, his being the sixth miss in the sequence during the home game when he hit the post against Sunderland on 12 September 1964. Shortly afterwards Skirton was so livid with Billy Wright after being dropped for a Spurs game, that he put in a transfer request on 9 October 1964. Arsenal batted away a number of transfer offers from Stoke City, Ipswich and Swindon (who interestingly suggest a swap deal with future Gunners nemesis Don Rogers!). However, a £20,000 move to Fulham was all but agreed agreed only for it to fall at the last hurdle, as Alan fought his way back into the Arsenal first team.

In his last full season during 1965/66, he was the first Arsenal substitute to be used in a competitive game as he came on for Jon Sammels on 23 September 1965 at home to Northampton in Division One. Alan made his final first team appearance on 23 August 1966 at home to West Ham having scored 54 goals in 154 competitive appearances for the Arsenal first team, and scoring 29 times in 68 reserves games. Alan was inducted into the Arsenal prestigious 100 Club, for players with 100 league appearances at it’s launch in 2013.

Skirton was sold at the start of Bertie Mee’s reign to Blackpool in September 1966 for £30,000. A week after the transfer he was back at Highbury scoring for his new club in a 1-1 league draw. After relegation in that campaign they dropped to Division Two, becoming the Seasiders’ leading scorer in 1967/68.

A return to the West Country came in November 1968 with Second Division side Bristol City, who paid £15,000 for his services. Torquay United was his next stop of the Third Division in July 1971 on a free transfer. The Devon side were relegated in 1971/72 to the Fourth Tier, and Alan was let go, whereupon he set sail for South Africa with Durban City. After a short spell there he returned to England landing at Weymouth, where he scored in their Southern League Cup triumph in April 1973.

While at Weymouth he entered into the commercial world of football, and in 1974 went back to Bath City, where despite being on the commercial team also occasionally appeared in the first team when required. He was also player manager at Melksham for a period in the late 70s. Alan also played cricket for Lower Weston Sports and Leigh-on-Mendip.

He moved to Yeovil in 1981 masterminding their commercial revolution which saw millions of pounds raised during his time. Integral to Yeovil behind the scenes Alan became the voice of Huish on match day, taking charge of the tannoy at the old ground. He was part of the move to the new Huish Park ground in 1990, and retired in 2002. However, he remained as a consultant and was in the stands as the green and whites entered the Football League in 2003. Sadly they were to drop back into the non-league in May 2019, just prior to his passing. After a period of suffering with Alzheimer’s, Alan Skirton died on 12 May 2019.

As a postscript I was made aware of Alan’s illness and how highly he was regarded in Somerset while watching Yeovil last season as they took on Swindon in September 2018. Coming on the back of a club record five consecutive clean league sheets all were expecting a home win, but Swindon easily won. I got talking to one of the old Yeovil chaps in the stands – who after finding out I was an Arsenal fan spoke freely about Alan – who he knew well, and had an obvious affection for his friend.