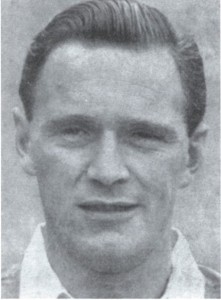 An Arsenal reserve and ‘A’ team player just after WW2, he also appeared in the County Championship for Hampshire.

Born on 1 March 1926 in Southampton, Hampshire, he was recommended to the club by former Gunners’ captain Tom Parker.

The strong tackling left sided wing-half between 1949 and 1952 played for the Arsenal reserves five times, and also made 45 ‘A’ team appearances.

Prouton moved to Swindon Town on 30 July 1952, who signed him at the Portsmouth cricket ground during a match with Sussex, and he made 16 first team appearances in the 1952/53 season before dropping out of the professional game. He moved to non-league Bath City in the summer of 1953 who were managed by former Arsenal defensive stalwart Eddie Hapgood, where he played in the reserves for a number of seasons.

He was the Hampshire wicketkeeper in 52 first class games between 1949-54.

After finishing playing cricket he taught at Downside School in Somerset, and umpired in the Minor Counties competition.