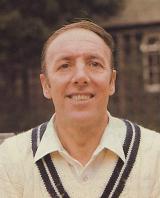 An England cricketer, he made a couple of appearances for the Gunners ‘A’ team before choosing the summer sport over football.

Born on 1 April 1935 in North Kensington, John was recommended to the club by fellow Middlesex wicket-keeper, Leslie Compton.

Murray became a wicket-keeper when playing in the final of a club competition his side’s keeper broke a finger. Murray took over and was so good he was offered to join the Lords staff in 1950. There he kept wicket and only two years later deputised in his first class cricket debut for the injured Leslie Compton at Leicester.

At Brentford FC as a youth player, Tommy Lawton, then manager of Brentford, offered him professional terms. In 1953 Murray joined the RAF for his National Service and luckily his cricket progress was not interrupted as he played for the Combined Services in the summer months of his military service.

Although aligned to the club since 1953, he was not signed by the Arsenal as an amateur until 17 August 1955, after his national service ended. A right half back he appeared for the ‘A’ team twice on 24 March 1954 against Portsmouth and 23 November 1955 against Crystal Palace in the London Midweek League. Arsenal placed him with Hendon for the 1955/56 season, but in 1956 he parted company with the Gunners and football as he decided to concentrate on cricket, influenced no doubt by the fact that Leslie Compton retired as the Middlesex keeper in that year and he took over the gloves.

He made over 500 first class appearances for Middlesex including 21 tests for England between 1952 and 1975, and was one of Wisden’s cricketers of the year in 1967. Such was his quality of keeping that he would surely have played for his country many more times if he had not been vying for the role with Kent’s Alan Knott, the greatest English wicket-keeper of all time.

Awarded an MBE in the mid 1970s, he joined D. H. Robins’ company, and continued to work there after his cricket playing career ended. He also took up administration in the game, serving on the Middlesex General Committee and as an England selector.