The medal is approximately 4cm in diameter, and has the inscription “London Football Association Challenge Cup” along with the London FA’s coat of arms on the front. On the obverse it shows that the medal was won by P. Connolly of RAFC (Royal Arsenal Football Club) in 1890-91, and has a gold hallmark. 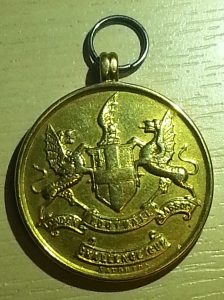 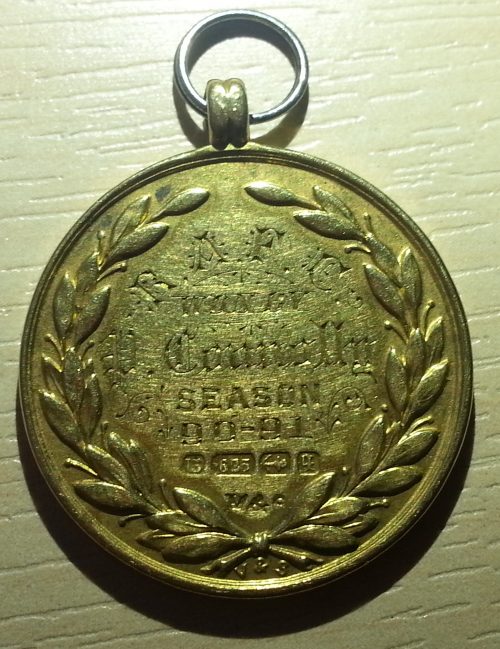 More commonly known as the London Senior Cup (or the LSC), this was the London Football Association’s most prestigious cup competition. Royal Arsenal had played their first ever fixture in this competition in 1887 and been unlucky losers in the 1890 final. This was not the case in 1891 when the Reds thrashed St. Batholomew’s Hospital 6-0 in the final, with Connolly scoring one of the goals.

Connolly was a key player in an all-conquering early Arsenal team that were unofficially crowned “Champions of the South”, but his story ended tragically early.

Peter Connolly came down to Plumstead from Kirkcaldy, where he had been a team mate of Arsenal FC founder David Danskin, towards the end of 1887 starting work in the Ordnance. He immediately endeared himself to the local fans by scoring four goals in a 6-2 thrashing of Tottenham Hotspur on his Royal Arsenal debut in February 1888. After a season and a half up front he moved to the right back position where his lightning pace allowed him to interact with the attack, a highly unusual tactic for defenders back then. In fact, he was so fast that he would regularly win the sprint races in local athletics events during the summer months.

Local newspapers from the time give the impression that Connolly was the club’s first superstar. So much so that he was usually referred to as “Peter” in match reports as opposed to just his surname, which was the norm. It was also reported that he was particularly popular with the female fans!

The Royal Arsenal squad in the summer of 1890. Peter Connolly is standing with his hands on his hips on the far left of the photograph.

Aside from the LSC win, the big event in the 1890-91 season saw the members of Royal Arsenal agree to turn the club into a professional outfit and pay their players. This immediately excluded them from being able to defend the London Senior Cup as it was only open to amateur teams.

The move to professionalism was in part a response to a number of players being tapped up by northern and Midland clubs. Connolly himself was approached by Derby County and Grimsby Town but resisted the temptation to move north and turned professional with Royal Arsenal during the summer of 1891.

He also retained his job in the Royal Arsenal armament factory which meant that he could not dedicate as much time to training as his footballing colleagues. An illustration of the constraints he faced in this dual work life were evident in early November 1891 when he travelled with the team to play against Notts County on a Thursday, worked all Friday night at the Ordnance and then played again on the Saturday at Tufnell Park for Arsenal.

By the 1892-93 season his chances to play first team football became severely limited and were not helped as he broke his arm in a reserve team game against Dartford in January 1893 which effectively ended his season. In the summer of 1893 he left Arsenal for newly formed local rivals Royal Ordnance Factories FC, reverting back to an amateur in the process.

During his time at Arsenal Peter played 129 games and scored 53 goals, winning the Kent Senior Cup and London Charity Cup in 1890 as well as the London Senior Cup in 1891. He also captained the team and represented Kent. Whilst at Royal Ordnance Factories, he gained his second Kent Senior Cup winners medal in April 1894. However, he sadly passed away in 1895, aged just 26, from the effects of tuberculosis.

The London Senior Cup was inaugurated in 1881 and is still contested today; the current holders are Tooting & Mitcham. The trophy that Royal Arsenal won in 1891 is the same that is competed for today and is the oldest original trophy used in the same competition in world football.