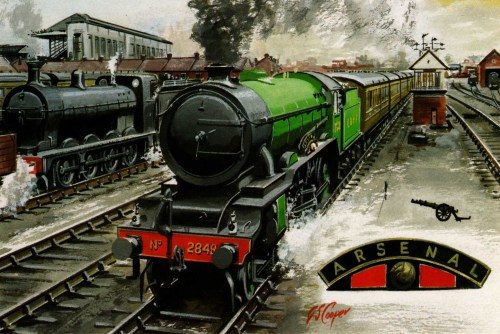 To be the first such club to be honoured showed the esteem the club was held in the 1930s, and reinforced the superiority the team had displayed over the decade. On 5 March 1936 Lord Lonsdale, the Arsenal Chairman named a London & North Eastern Railway (LNER) express locomotive “Arsenal” at Kings Cross station.

At the ceremony William Whitelaw, chairman of the board of LNER directors, introduced the Earl of Lonsdale saying that the company had an idea to name their new range of B17/4 steam engines after famous football teams, and that number one would be Woolwich Arsenal. Indeed many at this time who remembered Arsenal at Plumstead still called Arsenal by their previous title. Later on Lord Lonsdale saved the day by referring to the club by its correct title: The Arsenal.

The ceremony can be seen in this Pathe News clip:

Lord Lonsdale, in the presence of the chief mechanical engineer of the LNER Sir Nigel Gresley, George Allison, many players, the press and Pathe news unveiled the “Arsenal” nameplate on the engine of steam locomotive 2848.

Lord Lonsdale had become chairman of Arsenal FC on 16 January 1936 after Sir Samuel Hill-Wood stepped down from the role. Lonsdale was an avid and high profile sports fan who, as president of the British Boxing Board of Control, initiated the original Lonsdale belts within that sport. He was also a leading member of the Jockey Club and a founder member of the National Sporting Club. However he lasted less than a year in the top seat and resigned as chairman on 3 December 1936, becoming honorary President. 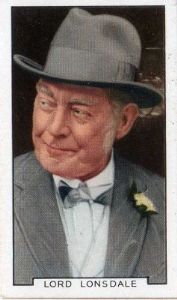 A few days before this ceremony the Gunners had despatched Barnsley in the quarter finals of the FA Cup, on their way to their second Wembley triumph. Similarly, a few days before the “Sunderland” train was named in April 1936, the Black Cats had won the League Championship.

However the naming of a train did not always bring a team good luck. In February 1937 the “Manchester United” engine was named but the team responded to the honour by being relegated to the Second Division at the end of the season!

Also the “Tottenham Hotspur” designated locomotive in May 1937 only lasted four months and was hastily renamed the “City of London” in September 1937.

The Arsenal was built in Darlington, finished on 3 March and entered service on 14 March 1936. When in service the Arsenal had a Leicester base running between London Marylebone, Nottingham, Sheffield and Manchester. Arsenal was transferred to work out of London Liverpool Street in September 1939 and it was renumbered 61648 by British Rail following the nationalisation of the railways.

In 1936 Bassett-Lowke, a toy train manufacturer from Northampton, produced just one club version of their model LNER B17 class football locomotives. It was of course the “Arsenal” 2848 edition, and this Bassett-Lowke model was available in clockwork, DC electric and AC electric versions.

After the engine was scrapped at Doncaster in December 1958 the distinctive nameplate was re-used and placed in the main entrance at Highbury to the left hand side of the marble halls. 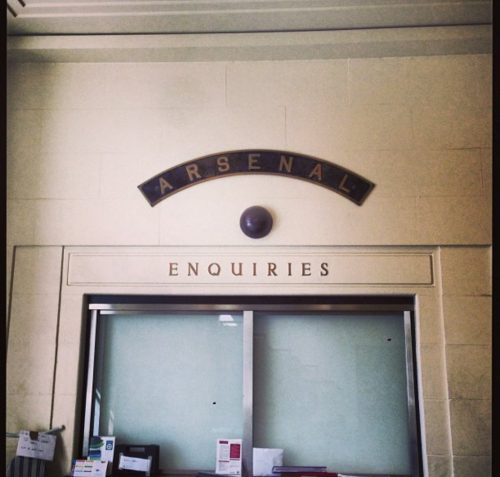 The nameplate in the marble halls, which still remains there to this day despite the grand old stadium’s flat conversion (photo courtesy of AFC Glen)

Echoes of the bygone era were revived early in 2016 when the iconic Flying Scotsman resplendent after a major refit set off from Kings Cross on its way to York. It happened to steam past the Emirates en route allowing for this magnificent photograph re-introducing the Arsenal and the train. 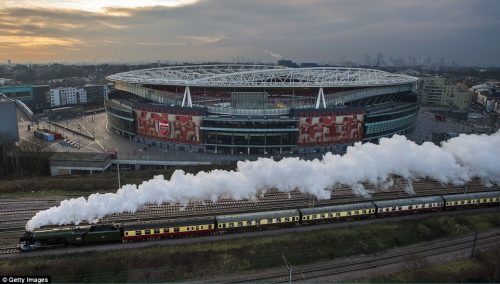 25 football teams who had engines named after them