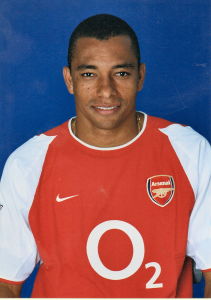 The World Cup winning star made his debut in a tri-team tournament played in Kapfenberg, Austria on 1 August 2002. He appeared against both Panathinaikos, of Greece, and the Italian club Roma on the same day. Each match was 45 minutes in length as Arsenal won the tournament with respective 1-0 and 2-1 wins.

Silva a very recent signing for £5million from Brazilian club Atlético Mineiro lined up in the centre of midfield, but due to the very short time at the club he played without his name on the back of his shirt. As ever he looked composed against the Greeks as he sat deep and protected the back four, as Arsenal dominated the shortened encounter.

In the first match Arsenal’s victory came courtesy of a goal from Sylvain Wiltord.  The French international jumped high to head into the top corner from a Graham Barrett cross from the left in the 28th minute. His countryman, Jeremie Aliadiere also played admirably as he continued to look lively during the short tour of Austria.

Aliadiere forced Panathinaikos keeper Antonis Nikopolidis into a great stop from an overhead bicycle kick, and also managed to hit a post. In the second 45 minute match Aliadiere continued his good form and netted together with Thierry Henry.