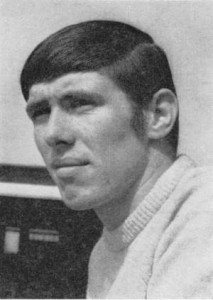 James Morrison McGill was the 516th player to appear for the Gunners. Unable to oust fellow Scot and Arsenal legend Frank McLintock he went on to find his niche as a player at first Huddersfield and then Hull.

Born on 27 November 1946 in Partick, Glasgow, he initially trained as a welder in a Glasgow shipyard as well as playing amateur football.

Jimmy was one of a number of youngsters signed from Possil Park YMCA in the 1960s when Arsenal used them as a nursery team, the most notable being Eddie Kelly. He began his professional career at Arsenal on 28 June 1965.

He made his debut for the Gunners at home to Leeds United on 5 May 1966. Only 4,554 fans bothered to turn up for the match, the lowest ever total at Highbury for a League game. Various reasons were given for this drop in support, but the simple factor was that the fans were fed up with Billy Wright who was soon after to leave as manager. 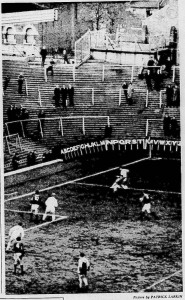 The Daily Mail shows just how sparse the crowd was on the North Bank for Jimmy’s debut.

He spent two years mainly in the reserves, and also won the Metropolitan League Cup with the A Team in 1966. McGill made 44 reserves and 31 A team appearances, scoring seven and a single goal for these respective teams

His final first team game was away at Southampton on 27 December 1966. McLintock was first choice as right half so after a dozen first team games, which included four appearances from the bench, he moved to Huddersfield Town for £10,000 on 8 September 1967.

A tough, no nonsense midfielder he was a central part of the Second Division title winning squad of the 1969-70 season and hence played First Division football with the Terriers.

He shared the nickname “Chopper” with the Chelsea full-back of the time, due to his combative nature on the pitch, and consequently was a club favourite with their fans and fellow players.

It appears that at Huddersfield he developed something of a reputation as a petrol head as this story from the Huddersfield v Arsenal programme for the game on 15 January 1971 shows. 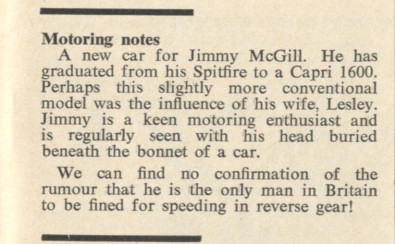 In October 1971, after 184 appearances for Huddersfield, he was signed by former Arsenal team mate Terry Neill who was in charge at Hull City.  Neill paid £55,000 for his services and installed him as captain.

In February 1976 he moved to play for Halifax Town, and while there was loaned out to USA side San Diego Jaws. During the 1977 English close season he played in Australia for Sunshine George Cross where he won a Victoria State league and cup double. Back in England for the 1977-78 season he moved to Frickley Athletic and retired from playing after one season to return to welding and lived in Huddersfield.