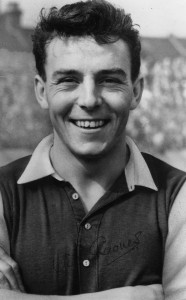 Vic Groves was the 463rd player to appear for Arsenal. He captained the club for three seasons, but his Arsenal career coincided with a fallow period for the club; their best position being 3rd in the League and the quarter-finals of the FA Cup.

Born on 5 November 1932 in Stepney, Groves worked in an East London fish market, he was skinning eels while also playing amateur football.

Vic came to prominence in the amateur game with Leytonstone where he had to go between the sticks for the first 20 minutes of their 2nd round FA Cup tie in December 1951 at Newport, as the regular keeper missed his train connections and arrived late.

As an amateur Vic was also allowed to sign for a professional team, and he chose Tottenham. He played four league games for them, scoring three goals including two on his debut in September 1952. Two months later he was picked for the England amateur team to play Holland. As a warm up to this international game the England team, including Groves, played an Arsenal XI at Highbury.

He moved to Walthamstow Avenue and then onto Leyton Orient, originally as an amateur.  He signed as a professional with the East London club on 12 October 1954, and while there Groves represented England at Under-23 level. 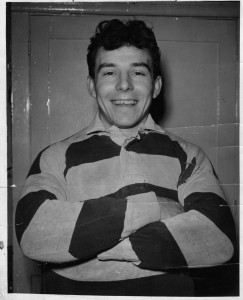 Vic Groves of Walthamstow Avenue in 1954

Vic was signed by Arsenal on 4 November 1955, for £30,000, together with Stan Charlton from Leyton Orient in what was pretty much the last transfer business that manager Tom Whittaker conducted for Arsenal before his premature death.

He scored on his debut at centre-forward in a home win against Sheffield United on 12 November 1955, but a rib injury in his second game at Preston sidelined him for a few games.

Worse was to follow in the home fixture with Preston in March 1956, as he picked up a knee injury that deteriorated in training a month later and eventually required a cartilage operation in the summer. This saw him miss much of the 1956-57 season.

This injury slowed him but he then formed a good working partnership with David Herd, where Herd was the focal point striker and Groves the provider.

Installed as the Arsenal Captain from 1959 until 1962, it was during this period that George Swindin moved him from the forward line to a midfield wing-half role. With the incoming Billy Wright replacing Swindin as manager he lost the captaincy and was used as a squad player henceforth.

Overall he scored 37 times in 203 competitive first team appearances including 2 European games. These two games were the first ever in European competition for the Gunners, coming against Staevnet in the 1963-64 Inter-Cities Fairs Cup.

However, Vic had previous experience in the same competition when he appeared in both legs for the London XI in the 1958 final against Barcelona which the Spaniards won 8-2 on aggregate.

He appeared for the Gunners in the final game on English soil of the “Busby Babes” before the Munich disaster. The game played in February 1958 was a pulsating 4-5 home defeat, said by many who witnessed it to be the best game they had seen. Also, he played in crepe-soled boots against Colchester in the FA Cup on an icy, foggy and very, very wintry January evening in 1959.

Additionally he played a total of 74 reserve matches, and two A team games, gained him a winners medals in the Football Combination and London FA Challenge Cup of 1962-63.

His final first team game was at Nottingham Forest on 7 March 1964 and soon afterwards, at the end of June, he moved to Canterbury City, retiring from playing in 1965.

Vic ran two pubs after his football career ended. Firstly, The Angel Tavern on Fore Street, Edmonton between 1966 and 1972 which was demolished to widen the North Circular Road. He then moved to The Crown and Horseshoes, 12-15 Horseshoe Lane in Enfield, Middlesex. After these stints as a publican he worked for Hambro Insurance.

This popular exuberant man was also the second cousin (not the uncle) of the player with the greatest terrace chant ever: Perry Groves.