During the summer of 1893 the members of the Football League voted to expand the size of the Second Division which had been formed the previous year. This expansion opened the door for Woolwich Arsenal to become the first Football League club based south of Birmingham. It also turned into a rather messy affair that has resulted in a number of assumptions being made by other historians that have become accepted as the true course of events.

Here, The Arsenal History, set out the actual story of that summer.

The 1892-93 season had been a very turbulent season for Royal Arsenal FC. A rogue faction within the club had attempted to take it over for their own means but was eventually defeated. The result of this, though, was that Royal Arsenal had to find a new home. The club returned to the Manor Field, its home between 1888 and 1890, but the ground required much work on it. Capital was raised by forming a limited company named The Woolwich Arsenal Football And Athletic Company Limited, to which all the effects of Royal Arsenal Football Club were transferred in May of 1893.

Royal Arsenal had had to rely on FA Cup games and friendlies during the two previous seasons as, after they turned professional in 1891, they were ineligible to play in any regional cup competitions due to the local Football Associations running these competitions being strictly amateur.

The members of Royal Arsenal FC recognised that, as they had to generate a regular income to pay their professional players, they would need to play in a league-type competition. However, there were no such competitions in the south of England at that time. They had tried to instigate a Southern League in 1892 but, after initial positive responses, interest soon petered out when potential members calculated that the costs would be prohibitive.

On to 1893 and the classic mis-telling of a story that has been repeated so often that it has become accepted as fact. The cutting below comes from Bernard Joy’s “Forward, Arsenal!”, published in 1952. 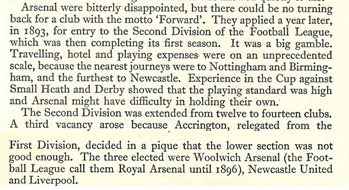 This was the first time that this version of events was told. And this, along with a number of variations, is how the story has been re-told ever since. 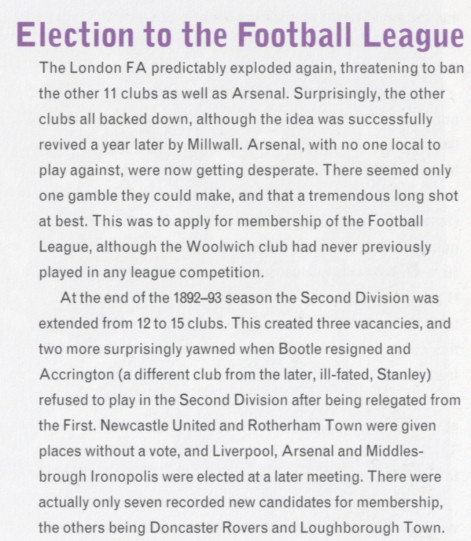 This gives the impression that Arsenal only gained a place in the Football League as an afterthought when Bootle and Accrington dropped out, but this wasn’t the case. The reason that the Second Division kicked-off the 1893-94 season with an odd number of teams was due to a number of events that took place over three months during the 1893 close season.

We now have the advantage that a considerable number of newspapers are available online and they allow us to search for individual words and phrases to ascertain what was actually reported at the time of the events.

This is what really happened. 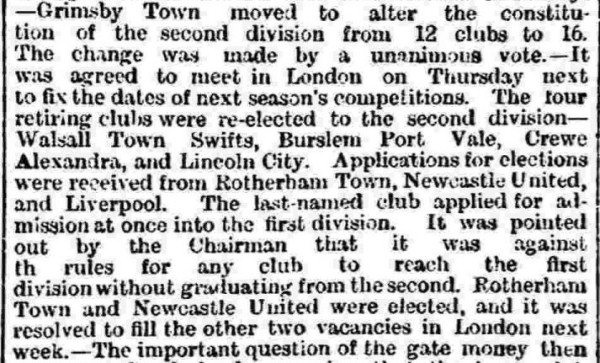 Five teams – Woolwich Arsenal, Liverpool, Doncaster Rovers, Middlesbrough Ironopolis and Loughborough – applied for the final two places. Arsenal and Liverpool were elected at a Football League meeting whilst the other three were the unlucky teams that missed out.

At this point Accrington, who had been relegated from Division One, and Bootle, who were already in Division Two, were still due to play in Division Two in the forthcoming season.

Fixtures for the 1893-94 season were announced. The Liverpool Mercury printed Bootle’s full set of fixtures which included games against Loughborough. Liverpool’s fixtures also showed the full complement of 16 teams in the Second Division.

At a meeting of Accrington FC, they decided to withdraw from the Football League due to financial issues.

At the Football League’s next scheduled meeting they accepted Accrington’s resignation and were replaced by Middlesbrough Ironopolis, who had gained the most votes from the three unlucky clubs not have been elected on 31 May. The Second Division still had 16 members. 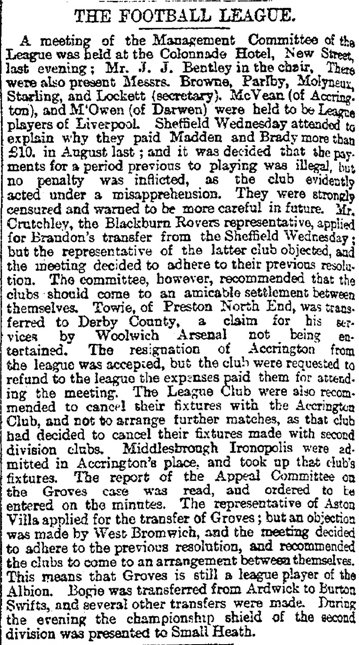 Reports started to emerge that Bootle were in financial difficulties and had resigned from the Football League. Bootle’s position was so dire that they were wound up two days later. 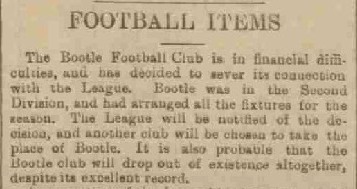 With only two weeks until the start of the season it was deemed too late to appoint a replacement. 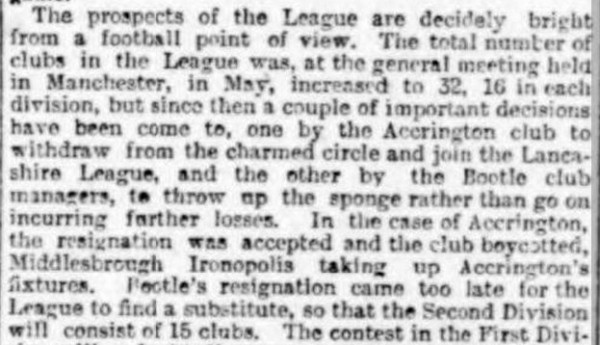 The Football League season kicked off with 15 teams in the Second Division.

We can now lay to bed the following myths:

So, the actual story of the expansion of the Second Division in 1893 is:

In 1893 the Football League decided to extend the Second Division from 12 to 16 teams. Newcastle United and Rotherham Town were elected at the AGM, and Woolwich Arsenal and Liverpool were elected at a meeting the following week. The cheeky Scousers had asked to be elected straight into the First Division but their request was rebuffed. Subsequently, Accrington and Bootle withdrew from the League, both due to financial difficulties. Accrington’s place was taken by Middlesbrough Ironopolis but Bootle’s resignation came too late for a replacement to be selected. The upshot was that the Second Division for the 1893-94 season comprised 15 teams.