On Friday in Muswell Hill while discussing many Arsenal matters Highbury Harry asked if we knew the first Arsenal terrace chant.

We do and here it is!

This is the earliest crowd derived chant mentioned in newspaper reports as being sung on the terraces about the Arsenal team, 123 years ago. Then most songs and chants were derived from music hall favourites, just as football songs today are generally based on pop songs.

With 3,000 Arsenal supporters at Chatham, within a crowd of 10,000, our fans were pretty happy to be 3-0 up just after half-time and started singing this re-arranged music hall song as victory was all but secured.

During the game the Chatham crowd referred to the Royal Arsenal team and supporters as Navvies, but the Reds supporters out sang them with triumphal renditions of “Ta ra ra boom de ay, the Arsenal’s won today”

However, Chatham scored 2 late goals and the last few minutes were nail biting for the away day faithful, but they held out for a win.

The song became a crowd favourite as it was mentioned again by the Woolwich Gazette being sung on the 3rd Sept 1892 at a home match against Gainsborough as Arsenal went 3 goals up, and again later that year in relation to a players similarity to Lottie Collins’ dancing when stretching for a ball.

This dance was no doubt copied and performed with the song on the terraces by the Arsenal crowd and it would not be beyond the realms of imagination to suggest that, while regularly singing this song, the supporters performed their own but similar dance along to the chant on the terraces of the Invicta Ground.

The origins of the song are from the music hall singer Lottie Collins and are worth a brief recounting. In the USA Lottie first heard the song ‘Ta-ra-ra Boom-de-ay’ in a revue called Tuxedo in 1891.

Her husband set about obtaining the rights for England. Once done, Lottie developed a suitably ‘burlesque’ dance to accompany it, which comprised energetic can-can style kicks that excited audiences by exposing stockings, sparkling suspenders and bare thighs. 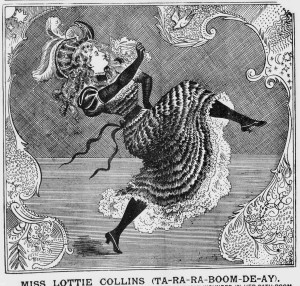 On stage she went crazy and the furore which “Ta-ra-ra Boom-de-ay” created was irresistible. It made her a bona fide Victorian music hall star.

This Victorian craze meant the song and Lottie, were in high demand. She performed it at theatres and music halls across London through 1891 and 1892, and at the peak of the mania around the routine it is believed she performed it five times a night at various venues. 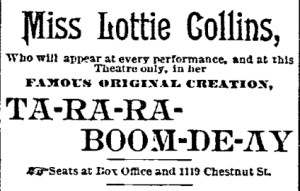 Unfortunately all good things come to an end and her private life was less than happy, culminating in 1898 when Lottie tried to commit suicide at 16 Highbury Crescent, close to the Highbury Station of the North London Railway. She eventually died on 1st May 1910 of heart disease at the young age of 45.

A sweet tuxedo girl you see

A queen of swell society

Fond of fun as fond can be

When it’s on the strict Q.T.

Not too timid, not too bold

I’m a blushing bud of innocence

Old maids say I have no sense

Before my song I do conclude

I want it strictly understood

Though not too bad I’m not too good

A sweet tuxedo girl you see

A queen of swell society

Fond of fun as fond can be

When it’s on the strict Q.T.

Not too timid, not too bold

The origins of the song are taken largely from the excellent period website: http://thevictorianist.blogspot.co.uk/

A version of this article originally appeared in the Woolwich Arsenal blog.