The crowd celebrate the Triple Championship win in fine style: 4 May 1935

It is just over 80 years and three weeks to the day that Arsenal’s season ended as champions for the third time in succession.

Huddersfield were the only team to achieve the hat-trick previously, and they too had been shaped by Herbert Chapman, though after Chapman’s untimely death Allison had taken charge of Arsenal for the start of this campaign.

Earlier in the season, in March 1935, the anticipated ‘match of the season’ drew an all time home club record of 73,295 as Arsenal entertained eventual runners-up Sunderland who were vying with the Gunners for top spot.

So the stage was set on 4 May for Arsenal to celebrate their success. And celebrate they did as, coinciding with this amazing football achievement, the country was preparing for a week of events and parties to honour King George V on his Silver Jubilee on 6 May. We must not forget that his grand-daughter is a fellow Gooner. 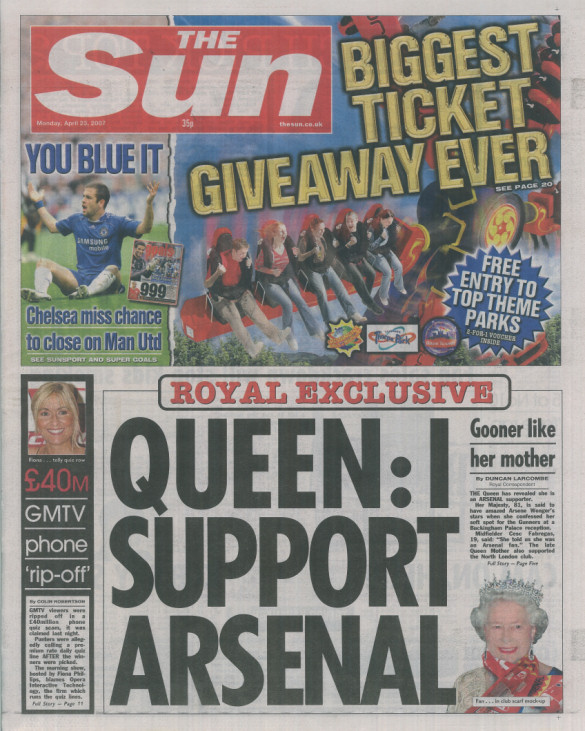 Highbury was bedecked and decorated as if the King himself was to arrive, and before the match started the crowd, which was half that of the Sunderland match two months previous, of 36,421 was treated to a parade around the perimeter of the ground of the League Championship, the Charity Shield and the London Combination trophies.

The teams came out prior to the kick off and all sang “God Save The King” accompanied by the marching band. This final game of the season against Derby was a dead rubber as the title had already been won and Derby could not be relegated, but the Rams played the game as if it was a cup tie as victory for them would mean they would be the only team in the land to beat Arsenal both home and away that season.

On Arsenal’s side one player was making his debut, as Reg Trim replaced Eddie Hapgood at left back. In fact it turned out to be Trim’s only game for the Gunners before he moved on to Nottingham Forest a few years later. Additionally Ehud “Tim” Rogers was making only his fifth start.

The game was ‘keen’ and five Arsenal men – Ted Drake, Rogers, Bobby Davidson, George Male and Pat Beasley – were injured during it and at one point they only mustered eight on the pitch, so ferocious were Derby in their desire to do the double over the champions. 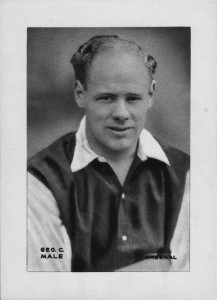 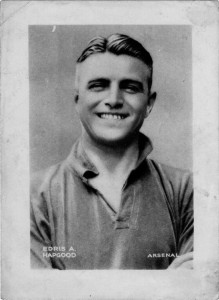 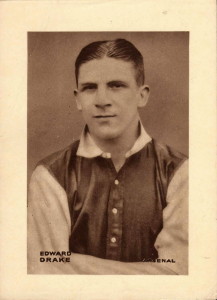 The Rams duly won 1-0 and on the referee blowing his final whistle the crowd went wild, unworried about the result, annoyed at the injured Gunners, but joyous about the whole season’s triumph. A stampede onto the pitch took place and was met with a police line, however the sheer strength of numbers got onto the pitch and made their way to the grandstand to pay homage to their team of winners.

By all accounts the police marshalled more officers and had some success in repelling the marauders by repeated charges. But the crowd again forced their way towards the stands breaking the police cordon, and making an unimpeded march towards their final location in front of the grandstand.

Here they were calling for Ted Drake who was the leading goalscorer in the First Division that season with 42 goals in 41 appearances, and a total that is still a club record for most goals scored by an Arsenal player in one season.

As noted Drake had been injured during the game and the crowd became more and more insistent chanting “we want Drake! we want Drake!”, but the first to appear was Alex James who appeared in bath towels to placate the crowd as the club knew Drake was struggling to put in a timely appearance, as he had only managed to play for 30 minutes in the game.

In the meantime an underground passage in the grandstand which led to the dressing rooms was swarmed by many supporters and, unfortunately, an officer was injured and taken to the dressing room for treatment, but the exuberant band of fans got no further than the entrance.

Drake finally appeared on the directors box and was heartily cheered as it was his goals which had effectively ensured the title. Once the crowd had seen Drake they dispersed as quickly as they had assembled, and the mounted police who were making their way onto the ground were not required, as the assembled throng had been sated and began wending their merry way home 20 minutes after the game had finished.

However, the mounted police did come in useful as not all had made their way home, a number of irate Arsenal men stayed behind waiting for the Derby players, who had played so “vigorously” in injuring many of the team. Eight mounted police cleared the pavement outside the main entrance so the team could get into their coach, and this escort was also required to see the coach out of Highbury with nothing stronger than a chorus of booing ringing in the Derby players ears.

The Highbury public houses no doubt continued to do a roaring trade from the fans, while the players also continued their celebrations and on the Tuesday 7 May the club held their Championship dinner and dance at the Connaught Rooms in Great Queen Street, Kingsway. 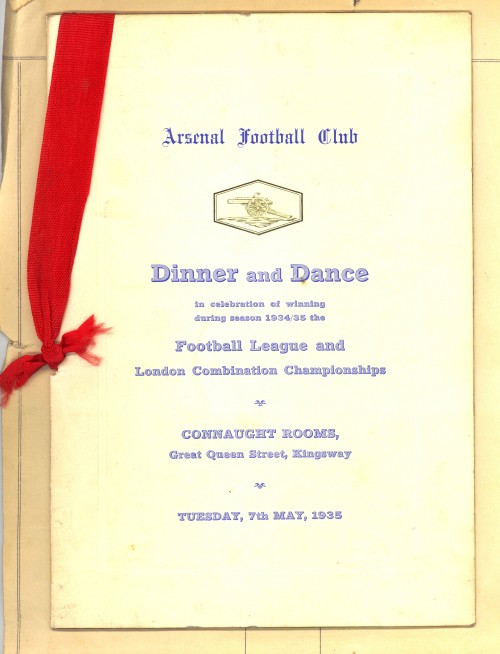 The whole Sunderland team and various officials were invited to be Arsenal’s guests at this celebration dinner, and each club formally toasted each other. If the toasts were for success then they worked, as Sunderland won the League and Arsenal the FA cup next season.

The nine course menu was entirely made up of French cuisine, and coupled with 5 different wines to complement the food it is a good bet that the dancing went on past the scheduled midnight close.

This period of dominance on the pitch was in the middle of the great Highbury Ground upgrade, as first the West Stand was built in 1932. 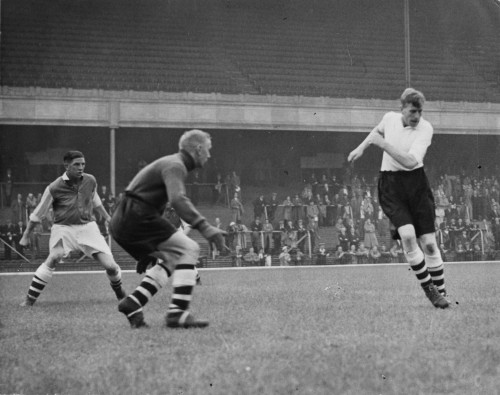 Drake, Bradshaw and Trim in the a pre-Season Reds v Whites match

This is a photograph of the pre-season Reds versus Whites game on 24 August 1935 with a white shirted Trim on the right and Drake to the left of the picture. What is interesting is the West Stand which was originally built with standing only on the lower tier, the seats being solely upper tier. The majority of the West Stand lower tier seats were not put in until 1969, when it was almost all but not quite seating, and it wasn’t until 1993 and the Taylor report that West Stand became fully seated.

Just after this final game of the season work began and lasted all through the summer of 1935 to cover the Gillespie Road or Laundry End (later known as the North Bank) of the ground. Part of the work included relocating the famous clock to the South terrace.

This was a prelude to the East Stand being built as the old Leitch Stand built prior to the first World War was torn down and replaced by an Art Deco masterpiece.

One of those on this exquisite project was local construction worker Albert Clutterbuck, the great grandfather of the brains behind the OpAa collective of artists who have been appearing in the Arsenal official magazine all season, namely Dan McCarthy.

The opening of this stand in October 1936 completed the 30s major upgrades to the ground. Though Arsenal’s on field dominance remained as they clinched the 1937-38 First Division title.

For those interested in the architecture of Highbury, “Angry of Islington” produced an entertaining two-part article which can be accessed here and here