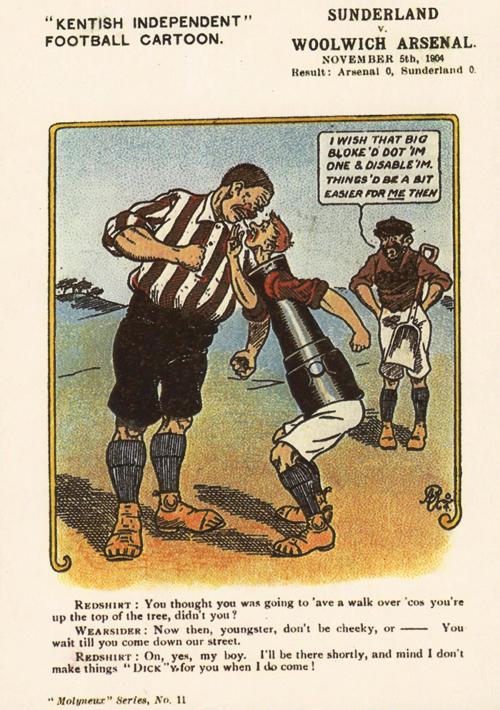 Woolwich Arsenal played host to the League leaders at the Manor Ground in a game that was witnessed by an estimated 30,000 crowd. Sunderland were a huge draw being that they had won the League four times since it’s inauguration which contrasted to this only being Woolwich Arsenal’s tenth game in the top flight. The Sunderland team included Alf Common who, three months after this game, would become the first footballer transferred for a four-figure fee, and would eventually go on to play for Woolwich Arsenal. Sunderland’s later form dropped and they were to finish fifth at the end of the season.

The cartoon has Redshirt standing up to the large Wearside bully, with the cowardly Stoker in the backgorund hoping that Sunderland rough up Woolwich Arsenal as Stoke were to be the next opponents for Redshirt. Their conversation is predicated on the fact that Sunderland were an established large club and Arsenal were merely starting in the highest echelons of football.

It is very possible that the crowd was far higher than the 30,000 ascribed to the game and indeed the Sporting Daily Post gave the figure as 36,000 – a record attendance for any game Woolwich Arsenal ever played in Plumstead. Due to an adminstrative error many people were locked out of the match, and poor gate entrance design ensured that areas of the ground became too crowded  and dispersal difficult. After the match a serious crush occurred at the Manorway end and as a result:

“some of the ladies had portions of their costumes damaged in the crushes”.
Woolwich Gazette  11 Nov 1904.

This shows that many women went to this particular game and, not only that, were standing on the terraces not just sat in the grandstand. While it is often portrayed as such, the football crowd in this period was not the sole preserve of the male and often ladies would be present at matches.

Additionally the poor design was the fault of the architect Archibald Leitch who had been commissioned by the club to re-design the ground after promotion. He was meant to have added many entrance gates, rebuild the South Stand and add capacity. About the only successful element of his work was the building of the first  Spion Kop at the Abbey Wood end of the ground. See The Crowd at Woolwich Arsenal and Woolwich Arsenal: The club that changed football for more details of the Spion Kop

Tellingly his work was not paid in full until 1910 when Henry Norris and William Hall took over the club, as he was renumerated as a creditor for the company of £1,300.