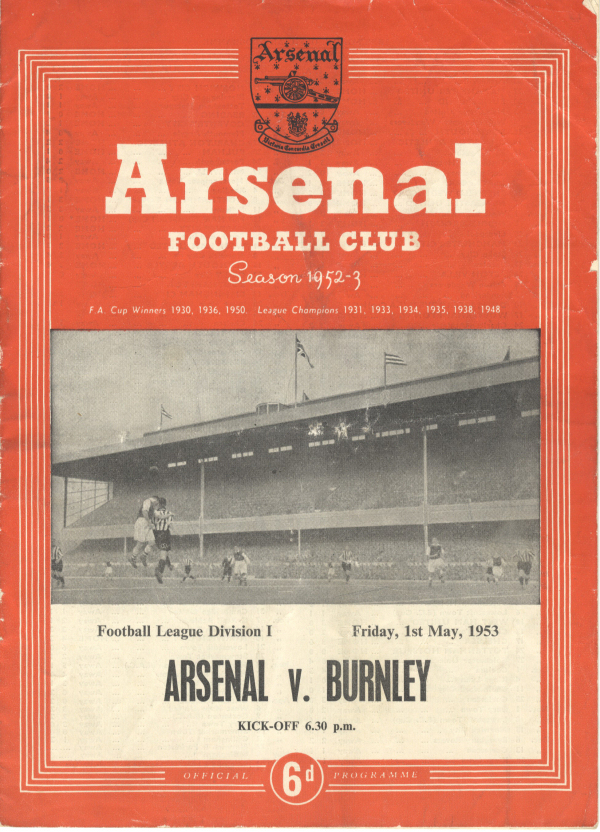 Two days earlier, title challengers Preston played their final match and had beaten Derby 1-0, with a Tom Finney goal, to ensure they led Arsenal by two points. In those days games were not all scheduled to end at the same time so Arsenal went into this League season finale against Burnley knowing that, as their goal average was better, a win would secure the title.

The game kicked off at 6.30pm on a muddy Highbury pitch, and in Burnley’s first attack George Swindin dropped a Billy Elliott cross allowing Roy Stephenson to nip in to give the visitors a shock eighth minute lead.

Two minutes later, after a marauding run from the right side, Alex Forbes smashed a long range drive which was deflected past Des Thompson for his only goal of the season. The Gunners took the lead five minutes later after a Don Roper shot was pushed around the post by Thompson. From the resulting corner Roper crossed for Jimmy Logie to dummy and Arsenal’s top scorer of the season, Doug Lishman, swept in a low volley for his 22nd league goal.

It became a two goal cushion on 21 minutes when Roper and Ben Marden combined to set Logie free to flick the ball past Thompson from close range.

Wing-half Forbes was Arsenal’s most impressive player on the night, being almost everywhere both as an extra forward and defender when required, and showing his stamina near the end as Arsenal’s rearguard came under increasing pressure.

After the break the light rain helped to turn the playing area into a quagmire which contributed to the game becoming a slog. But, nevertheless, a very strong and determined Burnley sent out a number of warnings, especially with twenty minutes to go as Bill Holden nearly pulled one back but was thwarted by Swindin. Five minutes later a second Burnley goal did materialise after a disputed Stephenson corner kick found its way to Jimmy McIlroy who fed Elliott to volley in.

The Highbury clock seemed to move very slowly after this second Clarets’ goal went in, but with the home crowd roaring them on, and every clearance being greeted like a cup winning goal, the Arsenal players held out for the last quarter of an hour in what was a very real test of their mettle.

By winning this game Arsenal ensured their seventh League Championship triumph, surpassing the records of Aston Villa and Sunderland both of whom had won the league six times.

This match was Ray Daniel’s final appearance for Arsenal before he moved to Sunderland in June for £27,500.

Burnley’s Les Shannon would go on to become Arsenal’s first team coach under Billy Wright between 1962 and 1966.

The assembled crowd refused to leave the streets outside Highbury after the match and called for the players, chanting: “We want Mercer.” There was a huge roar as the Arsenal captain, 38 year old Mercer came on to the broad steps of Arsenal’s palatial entrance with an outsize smile.

He waved to the crowd and said: “This has been the most wonderful day of my life, and now I am sorry to tell you that you have seen me playing for the last time. I am retiring from football.” His wife, Norah commented: “Joe has been promising to retire for years. He has been playing since he was 15. I can hardly believe this. In fact I will not believe it has happened until next season has started and Joe is still out of football.”

Norah Mercer was right to be sceptical as he had stated he was retiring at the end of every season since he led the club to the FA Cup win in 1950! Sure enough next season Mercer played in 19 League games and the Charity Shield, though this proved to be his last season appearing at this level, and his final game for Arsenal was against his home town club, Liverpool, in April 1954 when he broke his leg. Despite this setback he was listed as a member of the playing staff in 1954-55 but another comeback eluded him and he called time on his successful career.

Burnley’s right back for this game went on to play for two different countries. He made his Scottish debut in May 1954 and in the process became Burnley’s first ever Scottish international. In the next month he played twice for Scotland in the 1954 World Cup finals. Aird followed that up by playing a couple of internationals in 1958 for New Zealand after moving there three years earlier.

The day after this Championship decider, Wembley played host to the “Stanley Matthews Final” as Blackpool beat Bolton Wanderers 4-3 in the FA cup final. Bolton’s Nat Lofthouse had earlier in the week been awarded with the “Footballer of the Year” trophy by the Football Writers’ Association in London at their annual awards ceremony.

During the season Arsenal had beaten Burnley 2-0 at Turf Moor in the 5th Round of the FA Cup, only to be dispatched by the eventual winners 2-1 in a home quarter-final tie watched by a crowd of just over 69,000.

Burnley finished sixth, only six points behind Arsenal, while the bottom spot was held by Derby County who were relegated along with Stoke City.

This was the last trophy Arsenal were to win under the stewardship of Tom Whittaker, and indeed the next one did not materialise until the Fairs Cup was won in 1970.

Arsenal fan Queen Elizabeth II came to the throne just over a month after this match as her Coronation was on 2 June 1953.

At the end of this month the summit of Mount Everest was reached for the first time by Edmund Hillary and Sherpa Tenzing Norgay as part of a British expedition.