A City player really did come onto the pitch with a Monty Python Mr Gumby style handkerchief on his head in a top flight English game.

Percy Sands won the toss in this season opener and decided to play facing the blistering sun, the match being played in arguably the hottest conditions ever played in a football game in England. After an even first half-hour Peter Kyle scored, having been put in by David Neave. Five minutes later Irvine Thornley left the pitch, and was soon followed by Jimmy Conlin, both victims of the intense heat, which enabled Tim Coleman to double the lead, and the teams went in for a well-earned rest.

After an extended break of eighteen minutes the teams re-appeared, but City only had nine men as the two sunstroke victims were still laid out in the dressing room. Conlin came back briefly with a handkerchief on his head, but then George Dorsett keeled over. At this point, with only eight City men on the pitch, the referee consulted with the officials and the two captains, and the decision to continue was made.

Dorsett returned, making a full recovery, and scored with a great shot to reduce the arrears, but then Tommy Kelso left the pitch and the game was again halted, long enough for his return. Additionally, Bob Grieve who had been suffering from a cold all week was unable to take much of an active part in the second half.

As the game wore on Arsenal netted twice more, with Kyle scoring his second and Charlie Satterthwaite also getting on the score sheet. But City’s players, many prostrate on the ground, could not cope with the heat and they finished the game with only six players.

The game had the farcical situation where Manchester City only had one defender, Kelso holding the fort as all the others had gone off with sunstroke. The reports noted that he did better on his own than with his team mates present! Although this may have had something to do with the gentlemanly behaviour of Arsenal who, when faced with uneven odds, chose not to take advantage of their opponent’s calamity. The Daily Mail reporter, John Lewis, noted: “It was pleasing to see the visitors, after a short time, realise how exactly to play the right game when opposed by only one back.”

To explain why there was such a disparity in the susceptibility to the effects of the sun, the contemporary press all noted that Arsenal were by far the more seasoned, fitter and better conditioned of the two teams. The Manchester Evening News summed up the experience succinctly: “Practically half the City side collapsed and Woolwich were able to gain a substantial victory by four goals to one.” 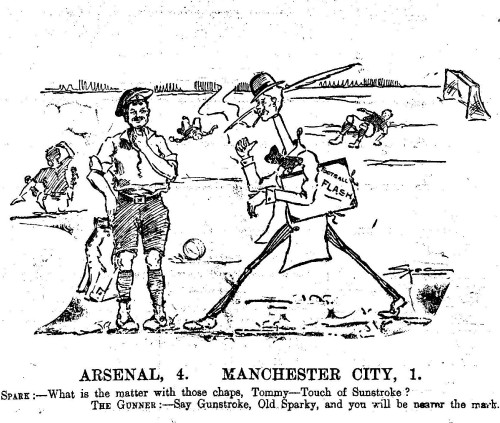 Cartoon from the Woolwich Football Flash 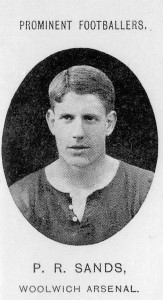 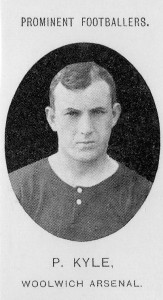 It was so hot that referees all over the country were allowed to officiate without their jackets!

Authorities arranged for water to be passed around the watching crowds at many matches to prevent dehydration.

Percy Sands, a schoolmaster and the Arsenal captain, had recently turned professional, and this was his first game as a paid employee of Arsenal rather than playing as an amateur.

This match was Peter Kyle’s debut for Woolwich Arsenal having recently signed from Tottenham Hotspur.

Manchester City were punished by the FA for awarding players bonuses above the stipulated ceiling of £4. Consequently, at the start of the 1906–07 season they were depleted of many players owing to the wholesale suspensions by the FA for their disregard of the authority’s rules. This was the reason why at the start of the season they had an experimental team many of whom were making their debut.

In addition, their former manager Tom Maley was banned sine die for his part in the episode

Two days after this match a dispirited Manchester City side went away to Goodison Park and lost 9-1 to Everton, though only Irvine Thornley was missing from the team being unable to recover sufficiently from the weekend game.

Just over a month later, on Saturday 6 October, Woolwich Arsenal topped the First Division table for the first time ever after beating Liverpool.

At the end of the season Woolwich Arsenal finished 7th in the First Division, while Manchester City ended up 17th.