The answer also clarifies a misconception that has become ingrained as part of Arsenal’s history – that of who captained Arsenal through most of their successes of the 1930s.

Here we explain how and why.

Some players are great.  Some – a few – are beyond greatness.  We may think in the current era of Bergkamp and Henry.  In the 1930s they would think of Alex James.  Even today in any list of great players of Arsenal we would expect to see him in the top 5.

Throughout the glory years of the 1930s James was considered the linchpin of the team playing as an unorthodox inside-forward acting as a link between the defence and attack rather than as an out-and-out forward.

However, in any list of great Arsenal captains for some reason he doesn’t get a mention. Back in November 2008 the Arsenal website ran an article on Arsenal’s greatest captains. All the great names that skippered title and cup-winning teams are there. Except for “wee Alex”.

Yet Alex James should be on this list as he captained Arsenal to two league titles and was captain for the majority of another title winning season, as well as being captain of one FA Cup winning team. The three titles just happened to be the three consecutive titles between 1932‑33 and 1934‑35.

So, what has happened in the annals of history for Alex James to be stripped of the recognition as Arsenal’s second greatest captain after Tony Adams?

Let’s take a closer look at what the Arsenal website has to say about the other captains of the 1930s. First we have Tom Parker:

Captained the club to its first major trophy – the 1930 FA Cup. Signed by Herbert Chapman in 1926 and kicked off his Arsenal career with 172 consecutive first-team matches, a Club record that still stands today. A reliable defender, Parker led the side to the 1927 FA Cup Final but suffered defeat against Cardiff. Made amends three years later as Arsenal beat Huddersfield at Wembley. Parker skippered the side to its first League title in 1931 before leaving the Club in 1933.

Hapgood succeeded Parker as captain and was a key figure in Arsenal’s all-conquering 1930s side under the stewardship of Herbert Chapman and then George Allison. Hapgood skippered the club to four League titles between 1933 and 1938 and lifted the FA Cup in 1936. He was just as influential for his country, winning 21 of his 30 caps as England captain. He wore the armband for the first time on November 14, 1934, in the infamous ‘Battle of Highbury’ against Italy.

What seems to have happened is that everyone has assumed that Eddie Hapgood succeeded Tom Parker as captain of Arsenal when Parker left in March 1933. As the article rightly states Hapgood captained England against Italy in 1934 and seems to assume that surely he must have been Arsenal’s captain at the same time.

Of course today we know that one does not follow the other.  If we look at today’s Arsenal team we have Aaron Ramsey as captain of Wales, Tomas Rosicky captaining the Czech Republic and Ju Young Park taking charge of South Korea. All captain of their international sides but none of them even make it up to being Arsenal’s vice-captain let alone team captain.

Arsenal’s Official Illustrated History goes further and tells the story of Hapgood finding out that James would be captain in the 1936 FA Cup Final from a newspaper. This gives the impression that Hapgood was captain but was stripped of this for some strange reason for this one game – a strange reason that is not explained in the Official guide.

So, time now for the true facts to be shown.  And in so doing, to give Alex James the credit he deserves.

Here is what really happened.

At the start of the 1932-33 season Tom Parker was 34 and coming to the end of his playing days. Herbert Chapman decided that two young bucks – Leslie Compton and George Male – were both capable of replacing Parker who only played five more games for Arsenal. But during the summer of 1932 Chapman decided to replace Parker as captain with Charlie Jones.

Note – click on all of the images to enlarge them to make them legible. 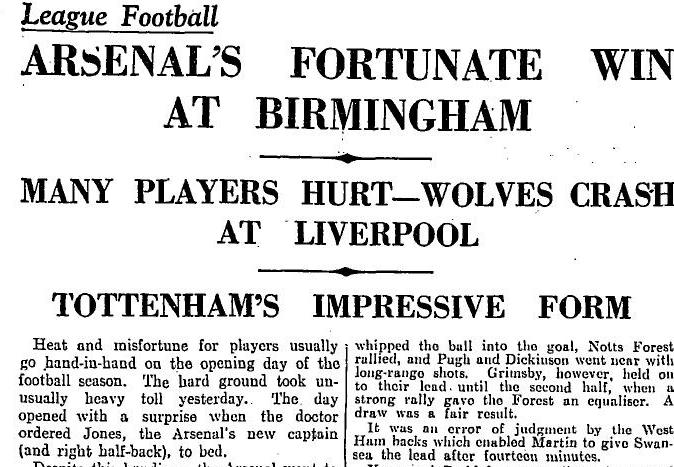 However, Jones picked up an injury in October and so the team was skippered by vice-captain Alex James in his absence. When Jones regained fitness in March 1933 he handed the captain’s armband (well, he would have if they had them back then) to Alex James as he had done so well in keeping the team at the top of the table.

Here is the Islington Gazette report on the subject: 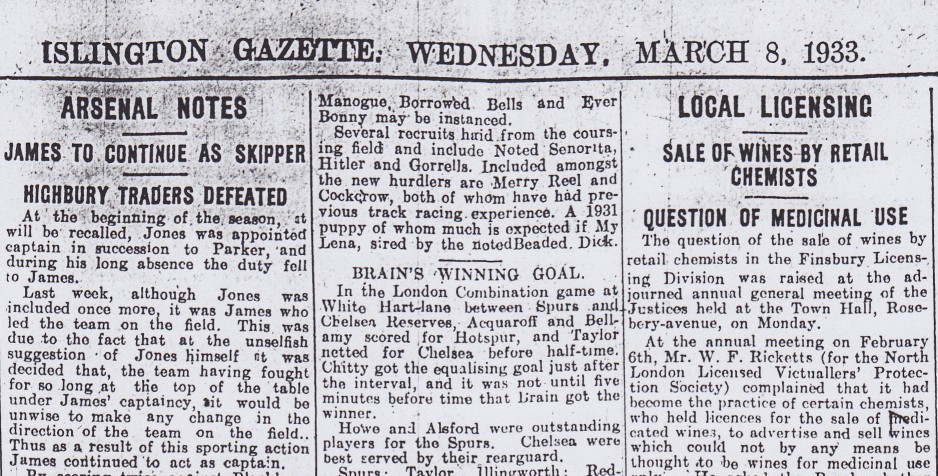 By a strange quirk of fate for the following season, James only played 22 league games and Jones (now vice-captain) played 29. However, James was captain for the majority of the league games – and he also scored one of the two goals that earned a point at Stamford Bridge to clinch the title.

We have three Arsenal programmes courtesy of The Everton Collection that show the true nature of the situation.

The first from 3 February 1934 shows James missing from the team. However, Charlie Jones is shown as captain (as he has vice to James), not Eddie Hapgood. This obviously means that Hapgood did not take over as captain in the summer of 1933. 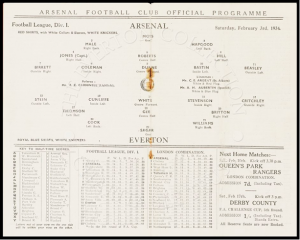 The second programme from 1934-35 shows Hapgood and James in the team with James as captain. 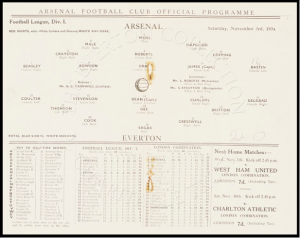 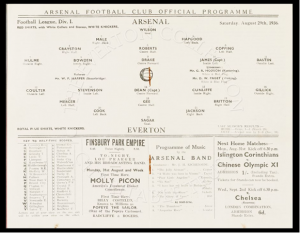 The 1935-36 Arsenal handbook also states that James “Has played a great part in our four League Championships, and has acted as captain during the last three seasons.”

James continued as captain until his retirement in the summer of 1937. The story behind the 1936 FA Cup Final was that James had been plagued with injuries in the run up to the game and it was touch and go whether he would play. Hapgood had been promoted to vice-captain following Jones’ departure in 1934 and with James not expected to play he would be captain. However, James passed a late fitness test and took the field as captain.

Contrary to what has previously been published, Alex James is Arsenal’s second greatest captain; leading his team to three league titles, one FA Cup and one Charity Shield. Sadly, this means that Eddie Hapgood’s record as Arsenal captain is overstated, winning a single league title in 1937-38.