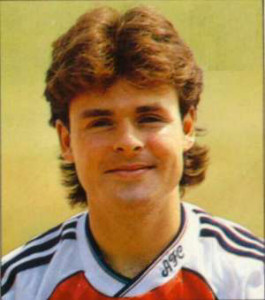 Swedish International Anders Limpar, Arsenal’s new £1.2 million signing from Italian club Cremonese, returned from honeymoon to make his debut on 24 July 1990. He was scheduled to appear in the same game as David Seaman and Andy Linighan two days earlier but work permit issues held him up, which meant he had a bit longer on honeymoon!

He made a good impression right away with the Daily Mirror stating that the “New Groom Sweeps them to Victory”. It was not only the press that were impressed as manager George Graham said of his new signing:

“This was a first class effort, especially as he had only met his new team mates a few hours earlier.”

…and it augured well for the coming season.

Limpar set up two of the goals in the 4-0 win in Gothenburg against high flying Swedish First Division club Vastra Fround IE, making the crucial passes that gave both Paul Merson and new signing Linighan the two first half goals. Graham kept him on the pitch only for the first half because of his lack of match fitness. In the second half goals from Alan Smith and another from Merson doubled the Gunners’ victory margin.