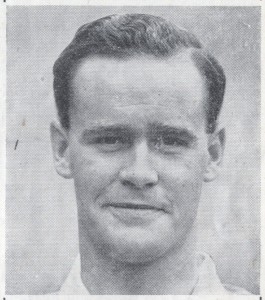 A proud and courageous cricketing Yorkshireman he spent a couple of years in red and white at Highbury in the junior sides before his reversion to full whites.

Born on 24 February 1931 in Rawdon, Leeds, Brian began National Service on 6 October 1949, having signed for Leeds United earlier that year on 23 February.

At the end of 1949 a bad thigh injury kept him out of football for months and Leeds gave him a free transfer at the end of July 1950. On 17 August 1950, already an England Cricket international, he signed professionally for the Gunners as an inside forward.

His career at Arsenal was spent mainly in the A team for whom he played 26 times netting 13 goals. Close also appeared in eight reserve team games, scoring three goals. Although registered as an Arsenal player he didn’t play at all during the 1950-51 season as he was also serving in the Royal Signals until 26 September 1951.

On 30 April 1952 he was selected for the reserves in the Football Combination Cup replay at Fulham, and while he tried to get to the football game on time, he did not manage to attend as he played in the Yorkshire versus MCC fixture at Lords.

On 3 May 1952 he was informed he was not to be retained by the club and was given a free transfer at the end of June 1952. He signed for Bradford City where he played a few league games before a torn cartilage finally put paid to his footballing career.

An England captain who played 22 times for his country between 1949 and 1976, he was famously brought out of retirement to face the full force of the West Indies pace attack in 1976 of Michael Holding, Andy Roberts and Wayne Daniel at the age of 45.

My abiding image of him was his courage against fast bowling as Close never backing down and refusing to even acknowledge bruises when hit, which was frequent during these innings particularly the Old Trafford test. 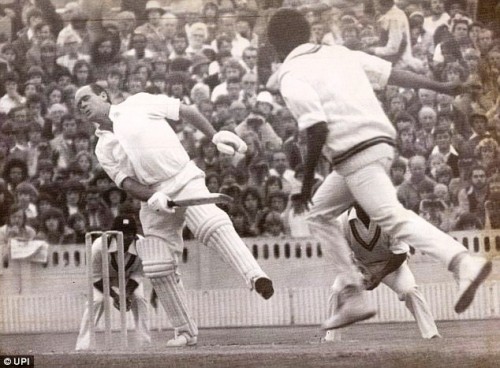 Close, with no protection at all, hit by an Andy Roberts bouncer

Ironically, on his test debut in 1949 he was the youngest England player selected at the age of 18.

A left-handed bat and right-arm bowler he was at Yorkshire between 1949-1970. He went on to captain four County Championship wins with Yorkshire in the 1960s, and after he left they did not win the title again for three decades to highlight his influence. Moving to Somerset between 1971-1977 he oversaw the rise of Ian Botham.

After he finished playing he was an England selector in the late 1970s and in 1984 returned to Yorkshire as a controversial chairman of the cricket committee. He regularly played cricket for fun in his later years and was a decent golfer.

Fearless and controversial it would have been interesting if he had progressed with his football career at Highbury rather than cricket at Headingley, as the Arsenal scout’s notes on him were brief but full of praise: “Very strong. Forceful. Full of promise”.

Brian Close passed away on 14 September 2015 in Baildon near Bradford, West Yorkshire aged 84.