Gunners Of The Past: Harold Walden – Soldier–Footballer–Olympian–Music Hall Artiste 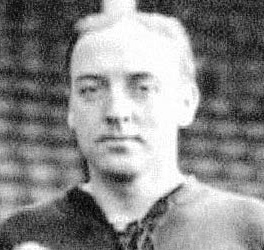 Recently Andy has published a full and definitive list of every Arsenal player to appear in a first team competitive match during the history of the club, and as a corollary we are currently researching each player who appeared between World War One and World War Two.

The two hundred and eighty-eighth player only played twice for the Gunners but had a life that made for an interesting and rounded story. Walden had a pre-football career in the army and then joined up for WW1, and was a-typical in that post football he was more celebrated and reported upon than his football one.

Born 10 October 1887, in Umballa, India owing to his father being stationed on the subcontinent with the Cheshire Regiment, the family moved to Manchester when he was a young child.

Emulating his father he joined up to the Cheshire Regiment in Manchester on 28 April 1902 when he was 14. He spent a number of years in India and attained the rank of acting Sergeant, and was a specialist instructor in drill and musketry.

While in the Cheshires he played football for the Army versus Navy and also appeared for both Cliftonville and Linfield while stationed in Belfast. He also appeared for the Irish league against the Scottish League while playing for Linfield.

On 13 October 1911 he presented the army with a £25 cheque to cashier himself out of the military. Walden immediately joined Halifax Town, and very soon after was picked up by Bradford City. He made his debut in December 1911 for the Bantams as centre forward, and went on to be the side’s top scorer in season 1911 -12

Evidently still an amateur at this stage, he was selected to represent Great Britain at the Stockholm Olympics in the football team. After being central to getting the team to the final, he opened the scoring as Great Britain won 4-2 against Denmark, and in the process won an Olympic gold medal in July 1912.

Unfortunately, after the stellar start he picked up a knee injury and a cartilage operation ensured he could not feature regularly during 1913-1915. 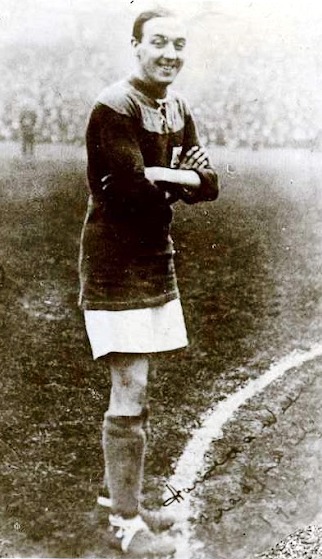 In May 1914 the Bradford City European tour included playing against teams from Germany. By September he took it upon himself to instruct the Bradford City players on military training including drills to ready them when the call to arms came to fight the Germans. A month later he was also instructing members of the Ravenscliffe Golf club.

On 22 April 1915, a day after a recruitment drive in which both Walden and “Dicky” Bond addressed the crowd at half time in a derby match between Bradford Park Avenue and Bradford City, he joined up. Walden joined the 2nd Bradford Pals battalion, or as they were officially known the 18th West Yorkshire’s and was commissioned to the rank of second Lieutenant.

On the same day fellow bantam player Bond joined up as well. He was well known to Arsenal fans as he had received a one month ban for swearing at two well connected sisters at the Manor Ground in February 1911. 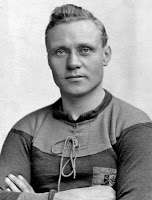 It had awful consequences for him as the ban ended just before the date of the FA cup final but the Bradford manager decided to keep to the winning team for the final and Bond was very unfortunate to be left out of Bradford’s only Cup win.

Walden moved to the 20th West Yorks in August 1915 and during 1916 was actively arranging games between soldiers and football clubs, for morale and fitness purposes.

In February 1917 he left the country for battle but at Étaples he damaged his knee by jumping into a trench during training and returned to Britain spending the rest of the war in Hull. His knee obviously improved with some treatment as he regularly guested as a forward for Hull in the 1917-18 season often as “Captain Wallis”

He played for Bradford City in wartime games in 1918-19 and ended the War as a Captain. His stage debut at the Bradford Alhambra Theatre had him singing at the piano for a lifeboat appeal show. The theatre owner liked his act and booked him on the variety bill and by December 1919 his new path was being forged, a full time entertainer who intended to keep his hand in at football.

He was a leading character Jack Metherill in the silent film “The Winning Goal” which was released in August 1920 having been adapted from a play “the Game”. The plot can be summed up simply as: Jack breaks his arm in an important game but still manages to score the winner, and his friend “Dicky” Bond was an extra.

He astonished many by signing for the Arsenal on 7 October 1920 as it was assumed he had given up playing football owing to a surfeit of bookings for his popular variety hall performances. It was reported he had 3 years worth of contracts signed for his shows and could earn £30 per week, almost 8 times what a footballer could.

The publicity engendered by a reported big money move to the capital greatly assisted in the popularity of his new film which played all over the country in 1920 and 1921. It was even said in some papers he cost the Arsenal nearly £3,000 which is most likely nearly £3,000 more than he actually cost.

Walden appeared twice in the Arsenal first team in consecutive away and home draws against Oldham Athletic on 12 and 19 February 1921. As centre forward he scored in the home game. He additionally played two reserve matches in October 1920 and at the end of March 1921, and a few friendlies before going back to Yorkshire.

At this stage of his football career he was not nearly as commanding a centre forward as he had been in the pre-war era, his switch to the variety and music halls was well timed.

In late April Arsenal were bereft of centre forwards due to injury, but Leslie Knighton tellingly did not call upon Walden to play relying instead on Billy Blyth, and by June 1921 Walden even though the publicity said he went back to Bradford City was in Yorkshire treading the boards, not training for the next season! 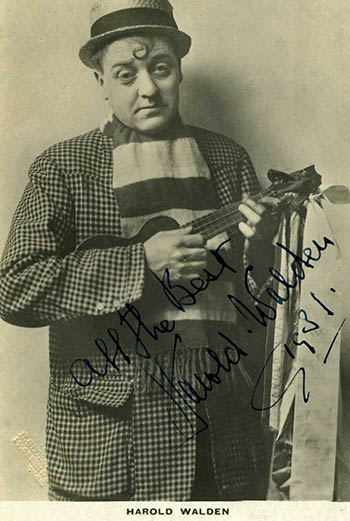 His performing career expanded and between 1924 and 1927 he undertook what was effectively a world tour encompassing India, China New Zealand, Australia and Africa. Walden met the FA touring team while out in Australia 1925, which was the tour that effectively halted Tom Whittaker’s playing career.

One of the reasons he gave for changing careers, aside from his waning football powers and obvious bent for the entertainment business was linked to how his performances were responded to by those watching. In the Derby Daily Telegraph on 15 February 1928 he said:

“Spectators could swear at you and call you what they liked on the football field, but if they swear in the theatre they get thrown out”.

He wrote, regularly performed and recorded “Only Me Knows Why” which was his signature tune. His stage show evolved over time as he mixed songs whilst also playing the ukele and piano. He was also a “comedian of a distinctly different type with a brand of humour all his own” who included aspects of his football career as part of the act.

For the rest of his life, including World War 2, he played on stages all round the country, and was often on the radio. He appeared in another football related film in 1948 called “Cup-Tie Honeymoon” as himself.

But sadly Walden suffered financial problems later in life and was declared bankrupt in the early 1950s, and it is rumoured that he had to sell his Olympic Gold Medal as a consequence. He died on 2 Dec 1955 at Leeds train station, suffering a heart attack after attending a Yorkshire Evening News Christmas Charity event.

His epitaph of “Soldier–Footballer–Olympian–Music Hall Artiste” succinctly sums up this ‘larger than life’ character’s work.

Many papers from the British newspaper library including Derby Daily Telegraph

Bantams Past – a site dedicated to Bradford City FC History