Arsenal and the Archery Tournament That Wasn’t

The Archery Tournament – Or Was It?

Those of you that have read an Arsenal history book will, more than likely, have noticed that the club organising an archery tournament in 1903 to raise funds. Arsenal handbooks throughout the 1970s included this statement within the club’s chronology:

Now, Edwardian England may seem a long time ago, but the medieval art of archery was very much in the decline, if not virtually non-existent at this time. On top of this, £1,200 was more than one fifth of Woolwich Arsenal’s turnover at the time. To put this into perspective, it is similar to a tournament bringing in £40 million today.

So, how was it that a tournament of this nature could greatly swell the club’s coffers?

Our story starts in June 1902 at the Annual General Meeting of Woolwich Arsenal FC. It was noted that, although the club had made a profit of £100 the previous season, the finances were not in the best of health, especially as the directors were looking to push towards promotion to the First Division. This would require the addition of at least three high-calibre players, which they could not afford.

Towards the end of the meeting, chairman Jack Humble announced that, at some time during the 1902-03 season, an archery tournament would be held with the intention to raise funds to buy these new players. Prizes amounting to £150 would be on offer. He also gave full details of the tournament which showed that it wasn’t what might be expected.

Over the previous year, more than 20 similar “tournaments” had been held in the north of England. However, rather than the expected array of targets with archers demonstrating their bowmanship, this was more a game of chance.

The Arsenal directors were not averse to using unusual means to raise money. In February 1901 they had hosted a Norwegian-themed bazaar that lasted three days. The event opened by the Mayor, was well supported by the local workers and dignitaries, making a profit of £841. 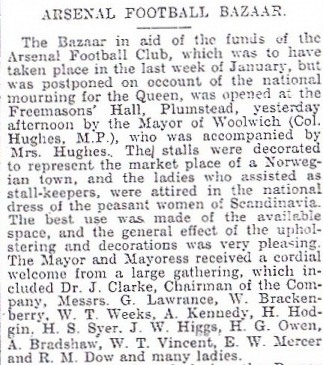 A Norwegian Bazaar in Woolwich – how bizarre.

Back to 1902, the date for the archery tournament was set for 29 November 1902. By that morning, 80,000 tickets had been sold up and down the country, realising £2,000 in sales. During the week running up to this date Arsenal had been visited twice by the police who were concerned that the tournament was actually illegal. Despite this, the directors decided to go ahead as they didn’t want thousands of people descending on Plumstead only to be met with disappointment and, possibly, causing a breach of the peace.

By 9.30am a big crowd had gathered outside the Manor Ground, amongst whom included a number of police officers. Once inside, it became obvious how the tournament would be played out. A board measuring 5 metres by 5 metres had been set up in the north stand. On this board were written the 80,000 numbers corresponding with those on the tickets that had been sold – the product of what must have been one of the most tedious jobs in history. Some distance from this board, a raised platform had been erected on the pitch from which various people would fire arrows at the target,

A young lady by the name of Miss Lewis had the honour of firing the first arrow. She finally managed to hit the target with her third attempt. 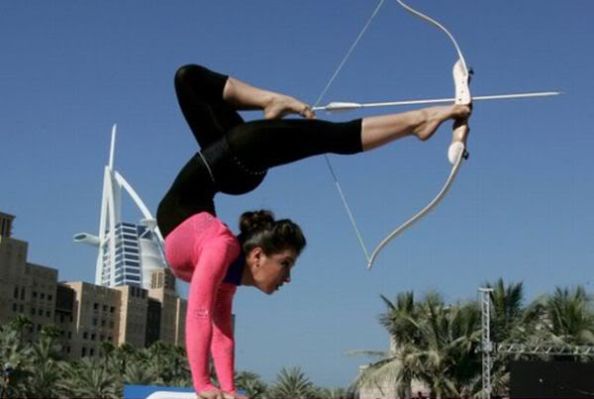 The lucky winner of the first prize of £150 was Mr Grubb of 190 Plumstead Common Road, whilst A Straughan of Erith took home a piano worth £40 as second prize. 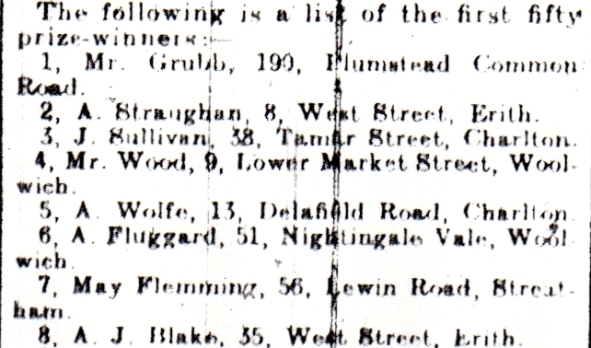 The first eight is enough…

For the next two hours a number of other ticket holders were allowed to try their luck with varying degrees of success. Some managed to hit the target whilst the majority showed that it was fortunate that it wasn’t a competition based on skill alone.

In the afternoon Woolwich Arsenal beat Lincoln City 2-1 in front of 14,000 which was one of their largest crowds of the season, whilst, in the evening, a concert was held at the Freemasons Hall. It was this concert that the 80,000 tickets were supposedly sold to gain entry to, thus theoretically bypassing the law and ensuring that the archery tournament wasn’t, by definition, a lottery. The hall was packed and hundreds outside were unable to gain entry. Throughout the evening local artistes performed, and the winners collected their prizes; most were locals but some were from as far afield as Nottinghamshire, Yorkshire and Lincolnshire.

However, that was not the end of the story. Two weeks after the tournament the Kentish Independent published a letter, signed by five local clergymen, criticising the club for encouraging poor people to gamble. 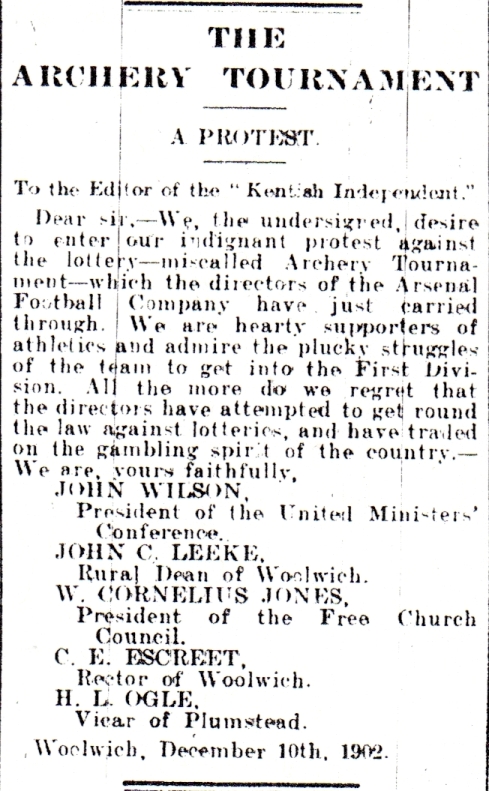 This letter appears to have been the catalyst for the police to renew their interest in the legality of the tournament. The upshot was that manager Harry Bradshaw, in his capacity as club secretary, was hauled before the Woolwich Police Court on 2 January 1903, along with the two promoters. Bradshaw was charged with “keeping a certain place to carry out a tournament contrary to the Gaming Act 1862.”

Rather than risk a protracted trial that could prove distracting to the team’s performance, especially as they were in a good position in the league, Bradshaw pleaded guilty. He was fined £5 and had to pay £10 costs. The good news was that Woolwich Arsenal got to keep the proceeds of the tournament, which was confirmed at the half-yearly meeting at the end of the month. 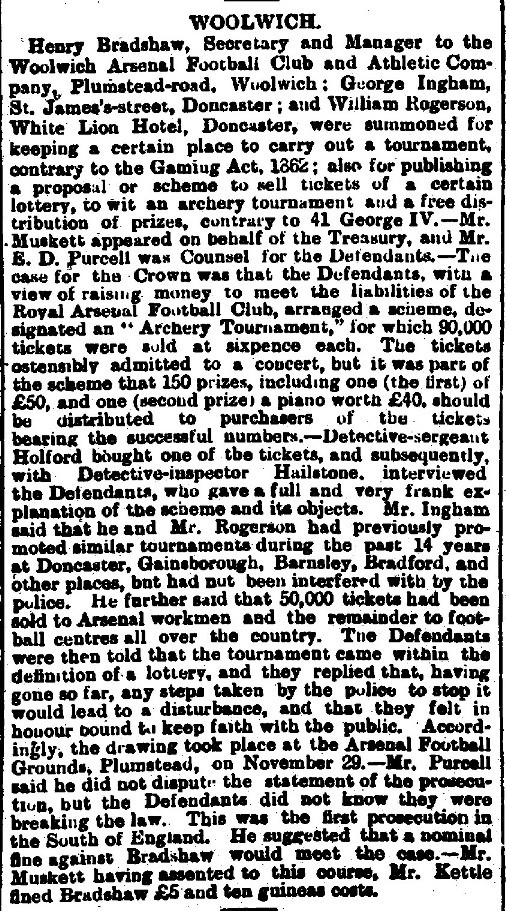 The money was put to good use as, little more than a month after the tournament, Arsenal had bought three players: Bill Linward from West Ham, Billy Bannister from Bolton and Tommy Shanks from Brentford. All three played a big part in the second half of the season in which Arsenal missed out on promotion despite losing just one league game in 1903. 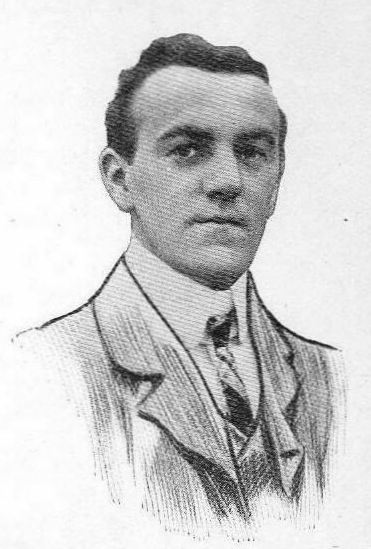 The following season, however, Linward and Shanks played a major role in Arsenal’s promotion to the First Division, with the latter breaking the club’s record for most goals scored in a season. A case of money well spent.

There is one final chapter to add to the story: a case of history almost repeating itself. In 1949 a group of Arsenal fans formed the Arsenal Football Supporters’ Club. In an effort to raise funds in an effort to offset the cost of publishing its fanzine, Gunflash, the committee sold tickets to its members offering cash prizes. In January 1952 they were informed by the police that this constituted a lottery and had to scrap the scheme, which was bringing in almost as much as members’ subscriptions! Thankfully, this did not cause the supporters’ club much financial distress and they are still going strong today. 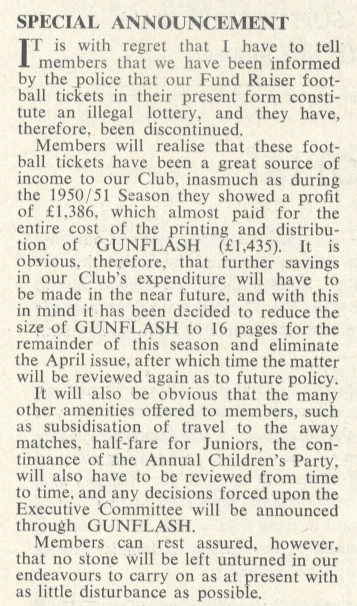