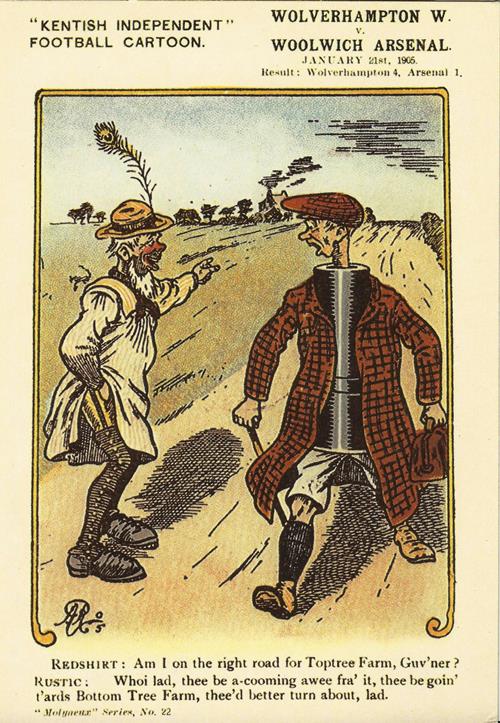 This heavy defeat was Woolwich Arsenal’s fourth in five games and saw them slide from 8th place to 11th. However, a run of three wins after this game ensured any hint of relegation was staved off.

The cartoon is a play upon the fact that with he poor set of results Arsenal may be heading down towards the table where Wolves, who were to finsh in 14th place, were sitting. The “rustic” yokel has a ruddy faced appearance this time but again meets Redshirt on the road.

Redshirt is looking for Top Tree Farm, but is told he is heading for Bottom Tree Farm and needs to make an about turn if he wishes to move back to the top. Redshirt has an overcoat on and this is the only time his shirt is not visible in any of the postcards, while the rustic has a peacock feather in his cap no double symbolising the Wolves win.

Wolves won 4-1 in front of only 8,500 which, though the third smallest league crowd the Gunners played in front of all season, was remarked in the Daily Express of 23 January 1905 as being an unusually large crowd at Molineux!

Tommy Briercliffe had put Arsenal ahead within 30 minutes but they were overwhelmed from then on.

Briercliffe was born in Blackburn in 1874 and began his career with St Luke’s before a spell with Clitheroe. In 1897 he joined Blackburn Rovers and spent two seasons there. After two seasons with Stalybridge Rovers he moved to Woolwich Arsenal in 1901.

He made an instant impact on the team. He was ever-present at outside-right during 1901‑02 and finished as Arsenal’s top scorer in the Second Division. Two years later he helped the team win promotion to the First Division, scoring a hat trick in the 8-0 defeat of Burton in September.

He played on the wing and remained in the side during the first season in the top flight (1904-05) before being sold to Plymouth in April 1905, which is a bit of a surprise as he played in 28 of the 34 League games that season. Afterwards he played for Brentford, before finishing his career at Darwen. In all, he played 133 games for Woolwich Arsenal, scoring 34 goals.

All biographical details taken from Woolwich Arsenal: The club that changed football