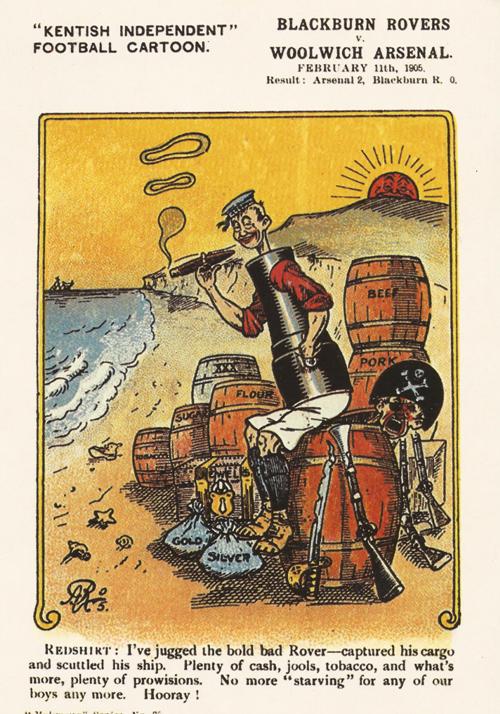 This game was a mid-table clash between the 9th and 12th placed teams and, as such, did not alter the league formation or indeed either team’s season greatly. Arsenal’s two goals were scored by Tommy Briercliffe and Tom Fitchie very late in the game.

The postcard is quite a simple image showing the victory by Redshirt over the Blackburn Rover here depicted as a pirate. Redshirt has a sailor’s hat on, has taken all the pirate’s loot and is smoking an absolutely massive cigar in celebration of the win. In the background the smiling sun is rising for Arsenal, and the Blackburn pirate ship is sinking.

This match is important because of the introduction of Andy Ducat into the first team. Ducat is the only pre-WW1 player to make it into the club’s all time top 50 players list published on the arsenal.com website. He was an England football and cricket international player. He won 3 of his 6 England football caps while at Woolwich Arsenal.

Andy Ducat was born in Brixton on 16 February 1886. After his family moved to Southend he played for local clubs Westcliff Athletic and Southend Athletic

Then he joined Woolwich Arsenal in January 1905 and made his debut in February in this 2-0 home win against Blackburn Rovers in front of 15,000 fans. He started out as a centre-forward but later moved to right-half and stayed for seven years, scoring 21 goals in 188 matches. He played regularly from December 1907 until he was sold on to the more successful club at the time, Aston Villa. Woolwich were a mid-table side and after playing him in almost every game in 1911‑12, Arsenal sold him for £1,000.

Unfortunately Ducat’s departure seemed to bode ill for both the player and Arsenal. Woolwich Arsenal were relegated a year after his departure and Ducat broke his leg in a game against Manchester City after just a couple of matches for his new club. He was out for much of the season and missed the FA Cup Final against Sunderland in 1913.

However, in 1920 Andy was still at Villa and the club again reached the FA Cup Final where they played Huddersfield Town at Stamford Bridge. Villa won 1-0 and Ducat got his cup winners’ medal. In the same year, aged 34, he won three more England caps.

He moved to Fulham in 1921 and stopped playing professionally in 1924 succeeding Phil Kelso, the man who brought him to Woolwich Arsenal, as Fulham manager. However his two seasons there were not a success.

As a cricketer he played once for England and made 52 first class centuries. After retiring from Surrey cricket club in 1931 Ducat became cricket coach at Eton as well as a sports reporter. He died while playing in a cricket match at Lords – the only man to have died during a match at the home of cricket. This occurred during a Second World War Surrey Home Guard versus Sussex Home Guard contest on 23July 1942. He was batting having made 29, when he fell down on the pitch dying of a heart attack.