A recent April Fool’s joke said that Tottenham were scrapping plans to build a new stadium and would become tenants at Arsenal’s Ashburton Grove.

Needless to say, some fans took the bait and were up in arms at such a suggestion. 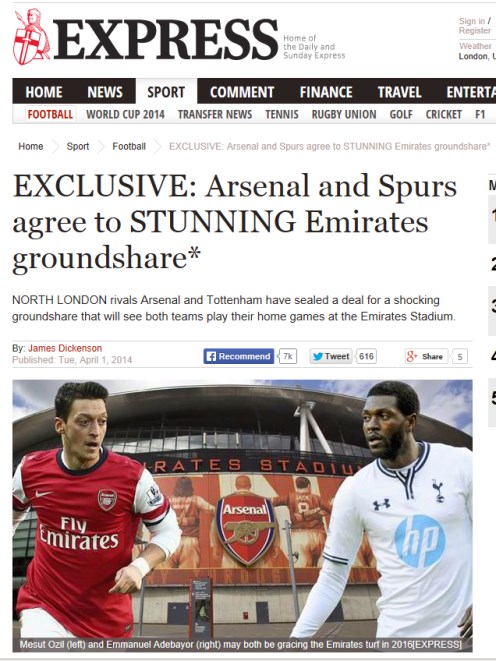 However, it has happened in the past on a temporary basis but it almost became permanent.

Here is the story of Arsenal and Tottenham being good buddies.

Many of you will be aware that during the Second World War Highbury was requisitioned for the war effort and became an air raid patrol control centre. This meant that Arsenal had nowhere to play their home games so Tottenham offered them the use of White Hart Lane for the duration of the war.

Arsenal’s first “home” game at White Hart Lane was played on 21 October 1939 when they beat Charlton 8-4 in a Football League South ‘A’ Division game. Les Compton, playing at centre-forward rather than his usual full-back position, scored four of Arsenal’s goals. The match was watched by a crowd of just 8,934. 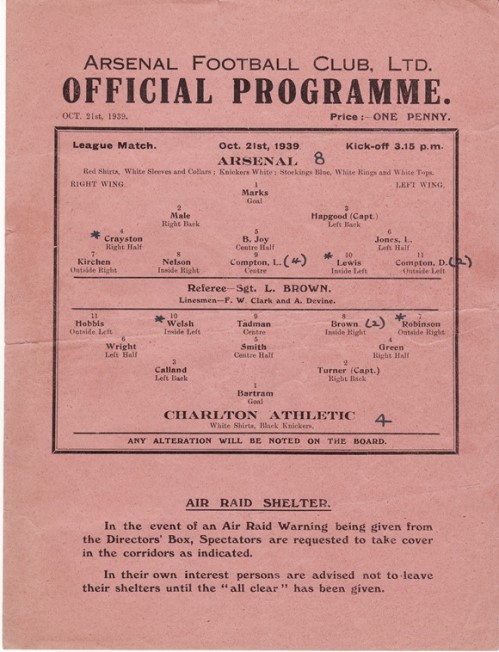 All told, Arsenal played 133 games at White Hart Lane during the Second World War, the most famous of which was the friendly against Dynamo Moscow during the 1945-46 season which saw the Russians win 4-3 in front of a crowd of 54,640.

What isn’t so well known is that Tottenham were actually reciprocating Arsenal’s hospitality that was extend to them during the First World War. Two years after the outbreak of the war the government needed to increase its production of gas masks, and White Hart Lane was deemed to be the place to set up a factory. Both Clapton Orient and The Arsenal offered Tottenham the use of their grounds to play their home games and the Middlesex club took up the offer of both clubs, alternating between Highbury & Homerton.

On 16 September 1916 Tottenham played their first home game at Highbury, losing 2-3 to Luton Town in the London Combination, watched by a crowd of about 6,000. Over the next three seasons they played a total of 32 home games at Highbury, the last being on 12 April 1919 when they lost to QPR.

But back to the issue of a permanent groundshare. This was seriously considered during the 1977-78 season. A new national stadium was proposed to be built on the site of Alexandra Palace which had become something of a millstone around the neck of the Greater London Council (GLC).  The intention was for Arsenal and Tottenham to play at the ground on alternate Saturday’s, and also for England to use it as their home instead of Wembley which was also considered a financial burden by its parent company British Electric Traction (as it is today by its current owners). 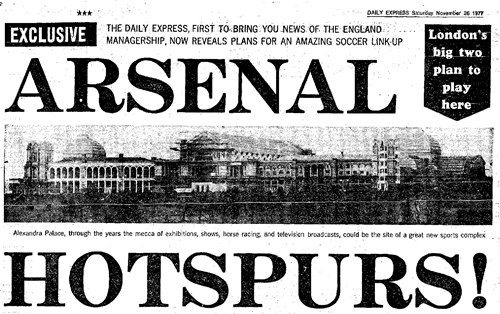 As expected a local residents’ group was formed, some were for the new stadium and some were against it. The major argument against being that the Alexandra Park racecourse that had closed in 1970 struggled to cope with crowds of 10,000 so how could the site accommodate crowds of 40,000 – 50,000? 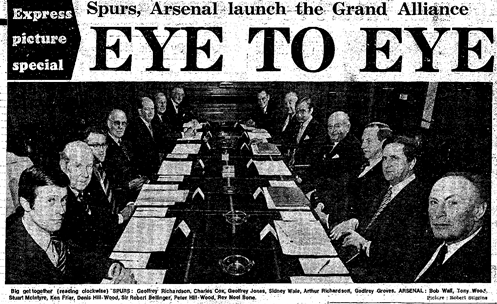 What on Earth were they thinking?

After two months of talks the GLC pulled the plug on the idea; Horace Cutler saying after much deliberation that it was “neither desirable nor practicable.” He then offloaded the financial burden of Alexandra Palace from the whole of the GLC’s ratepayers by transferring the site to Haringey Council where it became a financial burden solely for that borough’s ratepayers, as it still is today.

Perhaps the residents of Haringey should be grateful that the project didn’t proceed, especially this part: 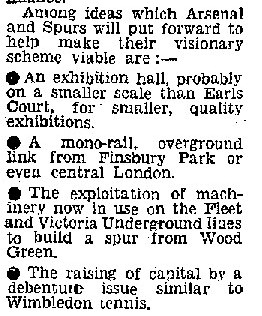 They need only have asked the residents of North Haverbrook how disastrous that would have been.

And so, here we are, nearly 40 years later with Arsenal firmly ensconced in a shiny new state of the art stadium and Tottenham scrabbling around in a load of rubble. 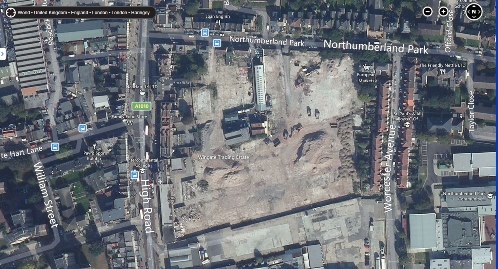 Posted in: Grounds, The Arsenal