The Arsenal versus Rochdale

After the First World War The Arsenal were in financial difficulties, as both Sir Henry Norris and William Hall had taken out a variety of loans and the club was still leasing the Highbury land. They had arranged the lease on the land, moved in, built the original East Stand, upgraded the ground and then the Great War intervened.

The manager at the time, Leslie Knighton, put the debt level at a colossal £60,000 in 1919, as this was the figure mentioned at his job interview with Norris. Whatever the true figure there was no doubt that The Arsenal needed to greatly increase their revenue from games. However one point of note was that The Arsenal gave free seats to men wounded in the war, at a loss of over £100 per match at this time – a generous and patriotic gesture at least for the first post-conflict season. Thankfully, persistently large crowds turned up and helped the situation. So much so that by 1925 they were in a sound enough position to purchase the freehold of the land upon which Highbury stood.

However, back to 1920 as this episode highlights one tactic to use as the means to increase income and, thus, reduce the debt. In the first FA Cup draw after the Great Conflict had finished The Arsenal were drawn away against Rochdale who, at the time, were third from bottom of the Lancashire Combination, and not a league club. Consequently, the shared gate if played at Rochdale was estimated at approximately £300, so Knighton was tasked with persuading the Rochdale directorate to agree to transfer the match to Highbury. This was a frequent occurrence when a small team was drawn at home to a team in the Football League. The gate money was split 50-50 so it made sound financial sense to the smaller team.

Knighton managed to do this successfully, guaranteeing Rochdale £1,000 from the gate as long as they agreed to forfeit home advantage. The implication being that Arsenal expected to get at least as much, if not more, as the visitor’s share. Knighton was more successful than his Spurs counterpart as they had tempted Bristol Rovers to change but they, unsurprisingly, preferred to play in the West Country than go to White Hart Lane.

The switch to Highbury was successful as a crowd of 26,596 turned up on 10 January 1920, but not as many as had been predicted due to the awful rain. Indeed the rain had been so persistent in the days before and during the game, the Sunday Times reporter compared the state of the pitch to the mud of the trenches that many of the players and crowd would have been familiar with.

As for the game Rochdale took a lead into the break, being 2-1 ahead, after Jock Rutherford had opened the scoring. Rochdale players were all on a £30 win bonus from their millionaire benefactor Jimmy White, but while they played stupendously for the first half in a bid to gain the cash, the extra fitness and skill of the First Division team told in the end as The Arsenal eventually ran out 4-2 winners.

By the time Arsenal finally took the lead in the 81st minute many thousands of the crowd had left; no doubt assuming that any replay would be played at Highbury on the Monday in better weather. This was not due to the need to “beat the rush” but because 20,000 of the crowd on the terraces had no cover from the deluge of rain that carried on for most of the match and were no longer able to face the elements. 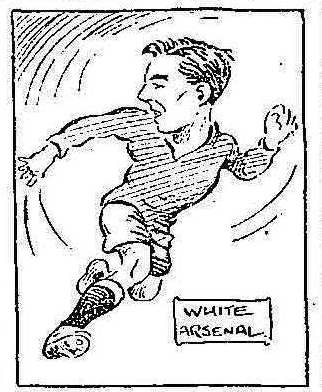 H White played at centre forward, but was not on the score sheet.
This was his first season at Highbury

Earlier in their time at Highbury Arsenal had switched a game, during the First World War as the season 1914-15 was played to a conclusion, and in the FA Cup 1st round Arsenal had drawn Merthyr Town away. By mutual agreement with Merthyr, the venue was changed to Highbury. The attendance of 9,000 may seem small, due to the war, but it was still substantially more than Merthyr would have hoped to attract at home. Arsenal won this match 3-0, played on 9 January 1915, with a hat-trick by Harry King.

Earlier still, in the club’s inaugural League season, Woolwich Arsenal made a cash offer to buy off Ashford in the 1st qualifying round of the FA Cup:

This was not an offer to move the contest as Arsenal were drawn at home anyway, but to allow Woolwich to save costs, as they knew the crowd would be lower than average due to the calibre of opposition, and in the event it was a meagre 3,000. Arsenal’s offer was not a frivolous one as they ran out 12-0 victors on 14 October 1893 but the offer being made openly and noted in the press highlights the different standards that applied in the FA Cup in those early years.

The practice of switching to the larger team’s ground has not entirely died out as most recently Farnborough Town agreed to move their FA Cup 4th round tie against Arsenal from the non-league club’s 4,000 capacity ground at Cherrywood Road to Highbury. Arsenal ran out 5-1 winners on 25 January 2003, though Farnborough were at least £500,000 to the good due to them conceding home advantage.