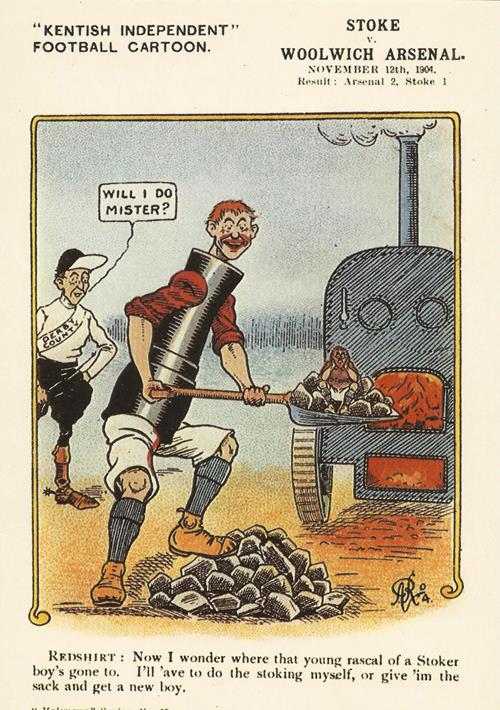 A feature of the game on 12 November 1904 was the incredibly boggy pitch, caused by incessant rain since the Thursday, however the weather cleared up and was a fine day on the Saturday of the match. The problem being was that so much rain had fallen previously as to ensure the pitch was “sticky”.  According to the Woolwich Gazette report of the match the conditions made for some farcical player collisions and noted:

“It was reducing a serious game to an absurdity almost, and one could scarcely wonder at the crowd laughing”.

Whatever the conditions Woolwich Arsenal managed to defeat Stoke 2-1 and this game was won with a goal apiece from two bit-part players for the club. Local man, Alfred “Happy” Crowe was a regular scorer in the reserves but only played 6 first team games scoring 4 goals between 1904 and 1906, while John “Sailor” Hunter had only one season at the club playing 22 times with 4 goals before moving on to Portsmouth.

The cartoon shows a happy Redshirt rather gruesomely about to place the much diminshed and reduced Stoker into his own furnace. He then is asked a question by a figure who would have been instantly recognisable to any football fan of that period. The Derby jockey is the famous Steve Bloomer who features in tomorrows Advent Calendar article, as the next game for Woolwich Arsenal was away at Derby County.