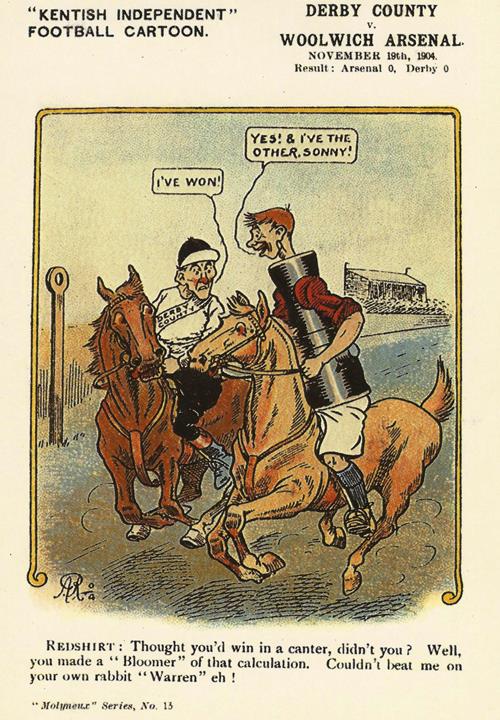 Arsenal went up to the Baseball Ground and, as a newly promoted team, did well to get a draw against a club as important as Derby who, as one of the original 12 Football League founding clubs, had also been three times runners up in the FA Cup in the past decade. However they were to finish the 1904-05 season one place lower than Woolwich Arsenal in 11th place which was a mark of their relative decline.

Aproximately 300 ex-Woolwichers now working at Siemens in Stafford went to the game on an excursion from Stafford to support the reds. Highlighting how workers in those days would have to move en masse to other parts of the country to follow the jobs especially in heavy industry.

This cartoon image is one of representatives of each team siding astride a horse, racing at Epsom in the Derby in what looks like a photo finish that was too close to call. Redshirt taunts the Derby man about the draw and has a clever retort concerning the number of points each team gained. The game itself was devoid of much interest with neither team creating much and the 300 hardy ex-Woolwichers would have been disappointed at the offering served by the two teams.

He also states that Derby had made a “Bloomer” thinking they would win easily, which in this case does not only mean they had made a blunder, but is an allusion to the David Beckham of the day: Steve Bloomer.

Steve Bloomer had played for Derby since 1892 and was a renowned superstar of the Victorian and Edwardian game. Bloomer was Derby’s leading goalscorer 14 seasons in a row and, in the process, was the highest scorer in the top division of the Football League 5 times.

In 1906 he moved onto Middlesbrough and on 5 January 1907 scored 4 times as Woolwich Arsenal succumbed 3-5. His incredible career record shows him scoring over 430 goals in  684 games, and he also scored 28 goals in his 23 England Internationals.

To show how important he is historically to Derby, currently the club play the song: “Steve Bloomer’s Watchin’” as part of the pre-match entertainment and they recently unveiled a bust of him outside Pride Park.