Another Cheeky First for The Arsenal

This is an expanded version of the article we recently wrote for the History Lesson page for the Arsenal matchday programme.

Throughout the club’s history Arsenal have always had a reputation as pioneers and innovators. On 23 March 1974 the club was involved in one of football’s more unusual firsts.

A new craze had taken the USA by storm the previous year and by 1974 it hit the headlines in the UK, even inspiring a number 1 hit single. Streaking was that year’s big thing with most major events being spiced up by someone who had stripped down to their socks and shoes.

Just before kick-off of the Arsenal v Manchester City game at Highbury towards the end of the 1973-74 season early arrivers witnessed football’s first ever streaker. A somewhat hirsute middle-aged gentleman by the name of John Taylor divested himself of his clothes, climbed over the perimeter fence at the Clock End and ran around on the hallowed turf until he was apprehended by three policemen.

The Islington Gazette managed to capture him in full flight, sadly (or luckily?) the copy from the microfilm isn’t that great. 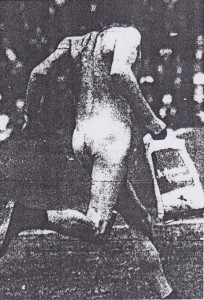 The Daily Mirror cameraman however, snapped him in full colour although not before he was caught. The next two pictures come from the excellent Mirrorpix archive. 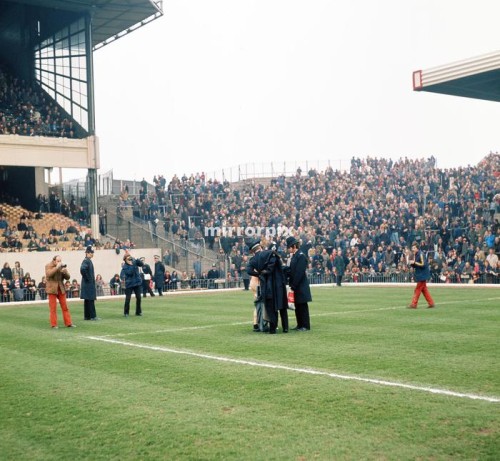 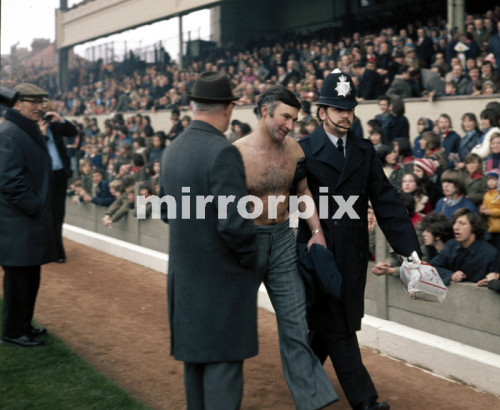 Is that a wig?

On the following Monday 44 year-old Taylor from Newbury appeared before a magistrate at North London Court where he was fined £10 and bound over for “using insulting behaviour whereby a breach of the peace was likely to be occasioned.”

The magistrate who heard the case, Mr Peter Goldstone, had actually been at Highbury and saw the events first hand.

Taylor said: “It just started off as a dare. When so many people got involved I couldn’t get out of it. It was more of a sponsored streak.” Indeed it was because he told the court that his streak had raised over £100 for Dr Barnado’s Homes from his workmates at Brentford fruit market.

I guess that today he would be banned from all football grounds and placed on the sex offenders’ register.

One thought on “Another Cheeky First for The Arsenal”