The Woolwich Arsenal Subbuteo side

For the past few years the famous and influential Arsenal Merchandiser @Shewore offers the first 50 lucky subscribers to one of his many tweets the chance to have a handmade “my  favourite Arsenal Subbuteo team” produced by a craftsman. This year I was lucky enough to be within the first 50, but had other ideas. Rather than struggle to pick my favourite team within my lifetime, I requested to be able to have a team from just one era – the Plumstead based Woolwich Arsenal of 1893-1913. And it was granted, indeed the chap who makes them was appreciative as it was a different challenge for his artistic skills, from the usual Thierry Henry or Dennis Bergkamp figures. I must also stress that the 50 subscriptions were taken up with a few hours of the offer going out, so there are no more places left unfortunately.

As I’ve researched and written quite a bit on this period certain players stood out for me. And being a contrarian some were not for the obvious football reasons.

As the months progress I will put up images of each figure and add a biography for each player to bring to life this largely forgotten and, while barren as far as trophies are concerned, it is still an incredibly interesting period of the club. 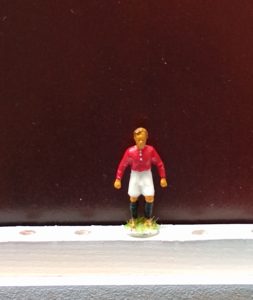 Each player will be in the strip of a specific season. While doing the research for these figures we found a number of alterations to the perceived wisdom of Arsenal kit in this period. Andy started the ball rolling with finding we had blue as an away shirt a year earlier than assumed in 1907. Also when playing away, if required to change shirt colour the team wore exactly the same shorts and socks as they did at home, which is logical as it would have saved the club money. In addition a number of short and sock, alterations from those published, have been noted and will appear on each player in the respective seasons. We have contacted historical kits to inform them of these findings and await their responses and website updates.

While selecting the team some players caught the eye owing to the supporters appreciation, when reading up in Colindale Library in 1989 and 1990 whilst researching for an MA dissertation on “The Crowd and Crowd Behaviour: Arsenal Football Club at Woolwich, 1893-1913” so I used this period as the basis for my team.

In this category comes the keeper – Hugh MacDonald who I’ve chosen as the number one between the sticks purely on account of reading some reporters esoteric words inferring that even when he had moved clubs to Oldham he was still tremendously popular with the vocal Arsenal terraces. This was no mean feat as many players were barracked out of the club by the hard-nosed Ordnance workers who followed the club through thick and mainly thin times.

Another who I remember from what appears to be eons ago at the now closed Colindale is Charlie Satterthwaite, a centre-forward very much in the traditional mould. Charlie, by dint of scoring a lot of goals in the First Division, was also a regular crowd favourite.

Tim Coleman, an inside forward, too was a goalscorer who was a doyen of the terraces. Much smaller in stature than Satterthwaite he became a nationally known figure. He is my first Subbuteo figure and will appear in the 1906-07 kit.

Caesar, as an uncompromisingly tough half-back, would have made the cut irrespective of his obvious football prowess owing to his magnificent moustache. This hirsuteness and his no nonsense directness has led to him receiving the accolade of a ‘Victorian Souness’, such was his similarity to the 1980s Liverpool hard man.

Sands was brought up in Plumstead and until Tony Adams’ captaincy was the longest serving Gunners skipper at nine seasons. Like Adams he was found at the centre of the defence.

Ducat, a mainstay of the team in the latter stages of the era was an elite sportsman, being one of the only 12 men who played both football and cricket for England. As well as donning the red shirt of Arsenal he was also playing in white for Surrey in the summer. To enable me to include Steve Theobald I have placed Ducat as an inside forward where he began his career, but he was more commonly located as a half-back.

Shaw makes the team as full-back not for his many appearances, but for his incredible back room ability at Arsenal as he led not only the first team to the Football Leeague title after Herbert Chapman’s untimely death, but was deeply embedded in the Highbury management structure of the 1920s, 1930s and 1940s.

While writing with Andy, Royal Arsenal – Champions of the South, the importance of Gavin Crawford on the wing, who bestrode the two clubs like a mighty colossus, became more apparent.  One of the few players to continue for a long time with Arsenal once it changed names in 1893 from Royal to Woolwich.

From Arsenal: The Complete Record 1886-2018 an obscure and largely forgotten Jackie Mordue came to mind. Jackie was a hugely influential figure at Sunderland alongside Charlie Buchan pre-World War One. He was only at Arsenal on the wing for one season and is included to show what might have been.

And whilst carrying out recent biographies on mainly obscure players as part of our over-reaching history project found some characters who did not feature within the narrative of the books. In this category were Steve Theobald and Joe Murrell.

Half back Theobald was a bullet maker at the Ordnance factory. He only made 24 first team appearances in nine seasons at the club, but as a local man who effectively used the football club as his leisure interest he makes for a fascinating backstory.

Murrell appeared even less for the club, and his six first team games were squeezed into a period of only one month. But as the only player I could find who played for both Woolwich Arsenal and Kent CCC during this period means he easily fills one of the full back berths. Obviously Wally Hardinge was also a Kent man, but did not play for the club until the Highbury days.

And there we are – my Woolwich Arsenal XI. They need a manager, and I have requested it be the fiery Phil Kelso!