Liam Brady in discussion at AISA 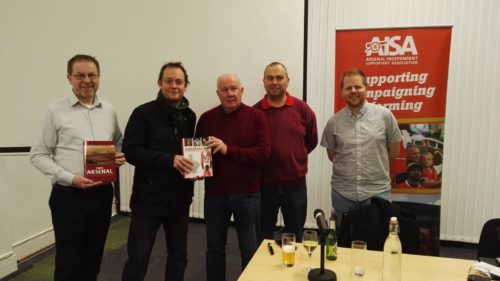 Liam Brady and the authors at a recent AISA event celebrating Liams’ career and theArsenalhistory.com.

Over the past month or so Andy and myself – together with Tim Stillman and Josh James – have been on various events and book signings to promote our recent two books:

Royal Arsenal Champions of the South and Arsenal the Complete Record published by Legends and deCoubertin respectively.

These events are here on our Book Tour – which began with an afternoon in the company of Charlie George – a very amusing man. But also included meeting the charming David Hiller at the Gunners Pub, a supporting role at Dave Seager’s “Double Double” event with Bob Wilson and Eddie Kelly, both lovely fellows, and an all too brief chat with Matt Scott and Paul Coyte at the Talksport2 studio the day before the Liam Brady AISA meeting, 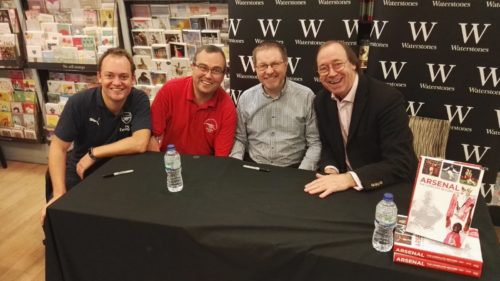 Sharing a joke with Charlie George at Waterstones 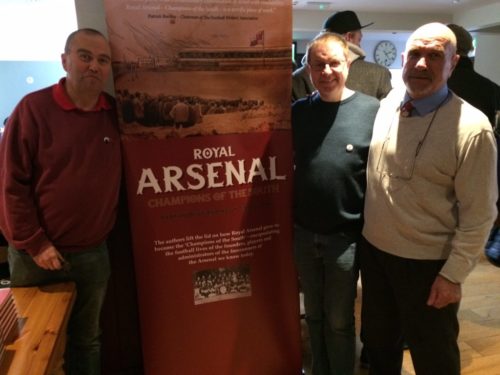 An impromptu meeting with Eddie Kelly at the Tollington Arms

The Liam Brady interview with Mick Padfield on Wednesday 21 November

Liam started by revealing his name was actually William Brady, and that he was signed by Arsenal in 1971 on a 3 year apprenticeship, when only 15. This was relatively surprising as he was a Manchester United fan and all scouts in Dublin were Manchester based, and all assumed he would sign for them. In a scramble to get him to Old Trafford his mum was offered a washing machine if he reneged on signing for Arsenal. Despite this incentive he still came to Highbury (and his mum still got her washing machine!)

He also stated that his nickname of ‘Chippy’ came about when his mum told main scout Gordon Clarke that all Liam did was eat chips.

Talk moved onto the discrepancy between him, a lithe super skilful ball player in the 70s and the notorious hard men of the period particularly the Liverpool trio of Graeme Souness, Jimmy Case and Tommy Smith.  Tommy Smith threatened to break his leg at Anfield when Brady was a very young left winger of 18 years, and regularly going past the right back Smith. Liam assured us that Smith was not joking which led to him reverting to one touch football when playing against the cloggers, and if there was a 50/50 ball they were welcome to it. A sensible move in the long term for avoidance of career ending injuries and in the short term as Arsenal won that particular game 1-0.

During my first game at Highbury on 18 November 1978 against Everton, Liam scored a brace including a collectors’ item as he scored one with his right foot.  I was unaware of this fact until he recounted this rarity while signing our books.

His most memorable game was unsurprisingly the FA Cup final of 1979, while admitting to terrible heartbreak over the 1980 Cup Winners’ Cup final loss.

Not interested in any other English team he was offered terms by Dave Sexton at Manchester United and Brian Clough at Nottingham Forest in 1980. Yet Arsenal wanted him to sign for United owing to EEC rules suppressing inter-EEC country fees, as it would have meant a larger fee for the club. After he finished at Sampdoria Don Howe tried to re-sign him, and later George Graham was half-interested but really wanted his own built team, so when he came back to England he went to West Ham, having turned down Celtic.

A great story recounted was of Terry Mancini (who Brady had seen earlier that day with the great Northern Irish keeper Pat Jennings). Mancini was a Londoner who qualified for Eire through his parents and had never heard the national anthem before. While lining up next to Brady the Eire anthem was playing, during which which Mancini said “F*** me their one goes on a bit Chippy”, to which a bemused Brady replied – “Terry, it’s ours!!!”

In one of his final games for Eire he was sent off for retaliation after being repeatedly raked and was subsequently banned for four games. After being cajoled by him, the FAI appealed and he and they organised his defence at a UEFA committee.  A chap from Cork spoke up for Liam but no one in the room, least of all the translators, could decipher what he was saying as he spoke so fast and was incredibly nervous. Even Brady couldn’t understand him, and thinking his chance for a proper defence had ended turned to another advocate on his behalf. This next character witness said to the assembled authorities. “Liam is to Southern Irish football, what Platini is to France and Maradona is to Brazil!!!” Miraculously his ban was reduced by 2 games.

He also recounted his time in charge of Arsenal’s youth academy, when he was taken on exactly at same time as Bruce Rioch’s departure. Noting that the best youth player to come through the ranks in his time was Ashley Cole, followed by Jack Wilshere  and Cesc Fabregas. Also that he found Arsene Wenger a great manager to feed the youth into the higher teams. He also said he felt Unai Emery was shaping up to be a very a good manager and was excited by the young players at Arsenal, namely Reiss Nelson, Ainsley Maitland-Niles and Emile Smith Rowe.

All in all it’s been a great few months… 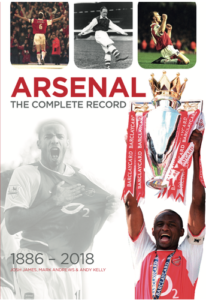 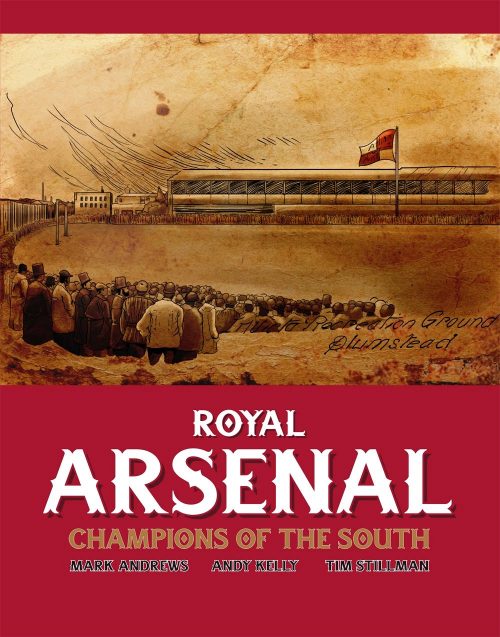