As a public limited company (incorporated on 26 April 1910), Arsenal are duty bound to lodge their annual accounts as well as a register of shareholders with Companies House. These records are available for all and sundry to see, albeit at a price.

On The Arsenal Collection website today we have published two of these sets of documents that help to show how much of Arsenal Henry Norris actually owned. We have some documents from other years but they are only partial copies so we didn’t want to publish them until we had the full documents, which will happen in due course.

Early in 1910 it became apparent that Woolwich Arsenal FC was in financial difficulty. Over the past decade they had received help from local businessman and major shareholder George Leavey. At the half-yearly meeting in January he proposed that the limited company that ran the football club be put into voluntary liquidation and a new company formed to take over. The full story of this is told in Woolwich Arsenal 1893-1915: The Club That Changed Football.

The long and short of it was that the new company was undersubscribed and was on the verge of collapse before three Fulham directors – Henry Norris, William Hall and William Allen – stepped in to save Woolwich Arsenal. Allen soon dropped out but Norris and Hall stayed the distance. 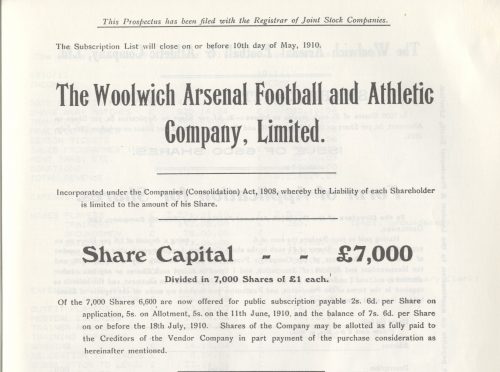 Of the 6,600 shares that were made available to the public only 1280 were allotted. The two biggest shareholders were Henry Norris and William Hall with 240 each. Some simple maths shows us that both men each owned 3.6% of the available shares or 18.75% of the allotted shares. At this point Henry Norris was a long way from holding a majority of the shares, let alone buying the club outright. The next biggest shareholder was George Leavey, the man that had kept the club afloat for most of the previous decade, with 100 shares. 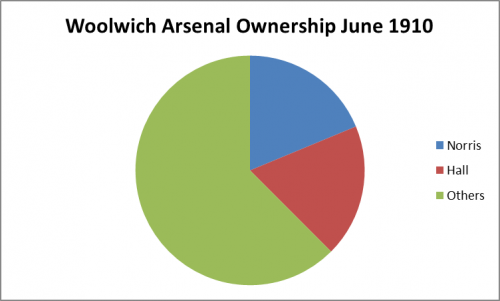 The first complete document that we have is from 1913. This shows that 1509 shares had now been allotted. Norris and Hall had both increased their shareholding to 340, each buying 100 more shares. This now gave each of them 22.5% of the allotted shares. 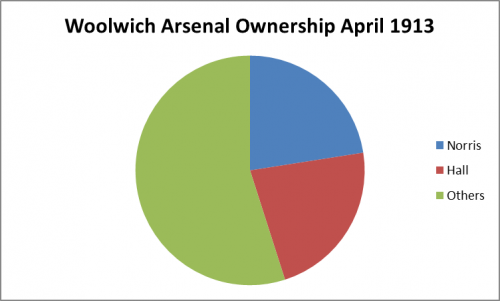 Roll forward eight years and the directors have done a sterling job with bringing in new investors. We now see that 3,175 shares have been allotted. Henry Norris still had the 340 shares from 1913 but William Hall now had 345 shares, five more than Norris. Not only has Norris’ share of the club been reduced to 10.7% but he was now only the second biggest shareholder! 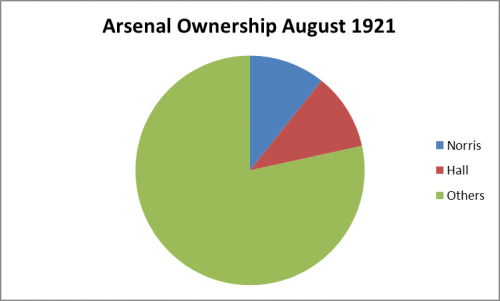 Although we don’t have the full breakdown of shareholders, we do know that in September 1927 Hall had increased his shareholding to 508 and Norris to 487 plus five more in his wife’s name. Even if the same 3,175 shares from 1921 were the only ones in circulation, this would mean that Norris’ share of the company was only 15.5% even if we include his wife’s shares. 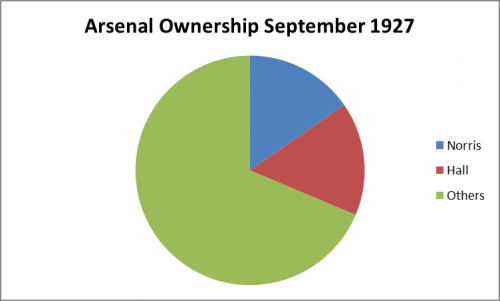 At this point Norris and Hall were banned from football and excluded from holding a position on the board of the club. Hall sold all of his shares to Percy Boyden who was chairman of Leyton Orient. That is another story, though! Norris sold ten shares before his death in July 1934, with the club’s accounts in August 1934 showing 477 shares in his name.

Therefore, Henry Norris never bought Arsenal, was far from ever being the club’s majority shareholder and it is highly unlikely that he was ever solely the club’s biggest shareholder.

Who ya gonna call?