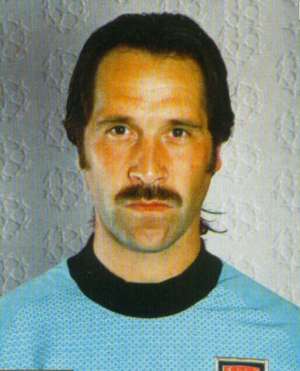 David Seaman was signed from QPR for £1.3 million in the summer as replacement for the very popular John Lukic who left for Leeds. Shortly afterwards, Seaman appeared in Arsenal’s first match of their three match pre-season tour of Sweden on 22 July 1990 against Varbergs Bois. This was his first game for a while as a thumb injury had dashed his chances of going to Italia 1990 with England.

Paul Merson opened the scoring on the 29th minute when he chipped the goalkeeper from the edge of the area. David Rocastle completed the scoring with a short range tap in, after being set up by Alan Smith, in the 39th minute. Seaman looked assured and made a couple of good saves to keep a clean sheet in the hour he played, after which he was substituted for Alan Miller.

Seaman was quoted as saying of his hopes for his career at Arsenal:

Andy Linighan, who had also been signed from Norwich that summer to bolster the defence, was also making his first start for the club, replacing Tony Adams at half-time. 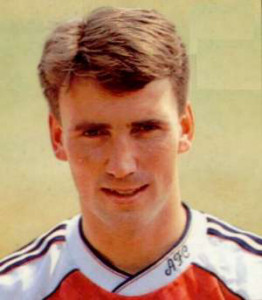 This is the first in a series of 10 short blogs. We were asked by Andy Exley to write in last season’s Emirates Cup programme about 10 big name Gunners who made their first team debut for the club during the pre-season. This was a tie in with Petr Cech who made his debut a week before the Emirates mini tournament at the 2015 Barclays Asia Trophy final