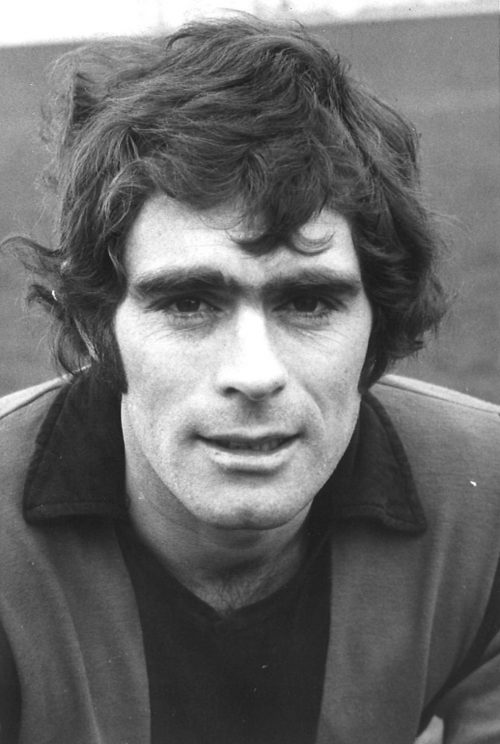 An Arsenal Reserve/Youth player, he had a healthy goal-scoring ratio all through his career as a prolific Centre Forward, even appearing as a male model in Middlesbrough.

John O’Rourke was born in Northampton on 11 February 1945 after his family were evacuated in WW2 from Rotherhithe, moving back to New Cross and then to Dagenham soon after the war ended. He had a fine reputation as a schoolboy footballer where he represented the Barking Schools Football Association and was selected in the early 1960s for the England Schoolboys.

Scouted by Arsenal and taken on as an Amateur, John scored 22 times in 17 appearances for the A team and he also made one appearance in the reserves.

He moved to Chelsea under Tommy Docherty in April 1962 and appeared mainly as a high scoring reserve, though he did make one first team appearance in the League Cup before being transferred to 3rd Division Luton in November 1963. There despite receiving a nasty injury in 1964-65 which kept him out of football for six months, he notched 64 League goals in 84 games and left for Middlesbrough in the close season of 1966 for £20,000.

He was instrumental in getting Boro promotion from the 3rd Division in 1966-67 with a surfeit of goals. While at Ayresome Park he gained international recognition where he played and scored once for the England Under 23 team against Turkey. After 38 goals in 64 league games for Middlesborough he left in February 1968 for £30,000 to Ipswich.

John was a great goalscorer. He wasn’t the sort who would run around all over the place, but he was very quick and had an eye for goal.

He was also probably one of the first lads in football who was a male model. He used to do the catwalk, modelling men’s suits for the likes of Cecil Gee’s, a local menswear store, so we used to give him some unbelievable stick in the dressing room. But he was a good lad and took it all well.

At Ipswich after 31 goals in 72 games he was suspended and transfer-listed for refusing to train by manager Bobby Robson. Subsequently on 20 November 1969 O’Rourke was on his way to Coventry for £80,000. His period at Coventry City was enlivened by being on the pitch when Willie Carr scored with the infamous and much publicised “Donkey Kick”. But after 17 goals in 52 league games he was on the move again to QPR in October 1971 for £65,000.

Injuries caught up with him at Queens Park Rangers and after a short stint at Bournemouth O’Rourke decided to retire from professional football in the mid 70s. After a brief move to Johannesburg Rangers in South Africa, he returned to England with his wife, purchasing a paper shop.

He spent time playing for mainly Dorset non-league clubs including Poole, Weymouth and Dorchester. Once he finally ended his playing career in 1981 he then ran the newsagents full-time on the south coast at Highcliffe, near Bournemouth.