Earlier this year the football world mourned the death of one of the game’s greatest ever players Eusebio, who scored 41 goals in 64 appearances for Portugal and an astonishing 638 goals in 614 games across 16 seasons spearheading the Benfica attack. A privileged 44,244 witnessed the great man grace the Highbury turf on August 4, 1971 in the return Champions Challenge Match.

Both teams treated the match as more than a friendly, and as a quasi-competitive prelude to the European Cup both had qualified for by winning their respective Leagues. Arsenal were smarting from the 2-0 win Benfica had inflicted on them in Lisbon five days previously, with goals from the mercurial Eusebio and Batista.

At Highbury, Arsenal started much the brighter and had fashioned four clear chances in the opening minutes but John Radford, George Armstrong, George Graham and Ray Kennedy were unable to find a way past Henrique.

However, Benfica could only hold out until the 14th minute and in the remainder of the first-half the Gunners dominated taking a 3-0 lead into the break. First, John Roberts headed in Sammy Nelson’s cross, then Radford headed in an Armstrong cross from the left-wing in the 34th minute. The third came on the stroke of half-time from Armstrong himself after a clever Eddie Kelly chip. 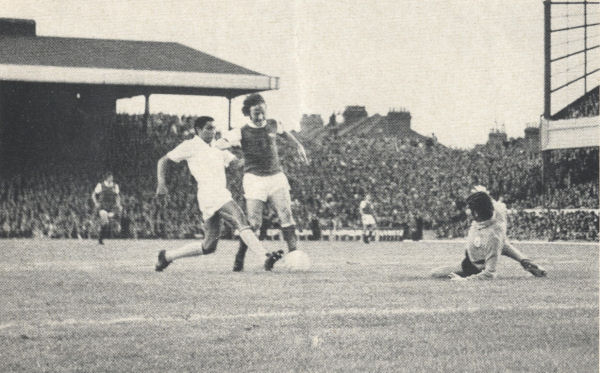 Both Eusebio and his strike partner, Batista, were taken off at half-time, while Arsenal made a total of four changes themselves. The changes suited Benfica and they began to look more and more dangerous, especially in and around the penalty area, while Arsenal lost their earlier rhythm and retreated into defence allowing Benfica to take the initiative.

They duly scored through a Jorge diving header in the 53rd minute, and Diamantino, with a tremendous shot past Geoff Barnett in the 73rd minute, pulled the score back to 3-2.

While Benfica looked the most likely to score next, Arsenal regained their two goal lead in controversial fashion as Graham slotted home a McLintock free-kick in the 77th minute. 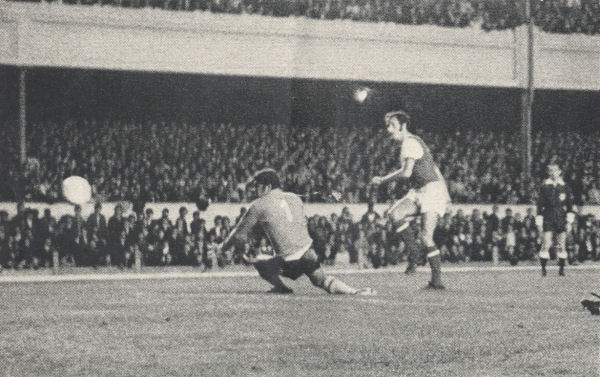 Cue outrage and vehement demonstrations against the referee by the Benfica players who were all convinced it was offside. Mr Burtenshaw appeared to take a few names and the match continued, but afterwards Mr Burtenshaw, who officiated in the 1971 FA Cup final, reported the whole of the Benfica team to the FA due to the vociferous nature of the jostling, pushing and complaints towards him. 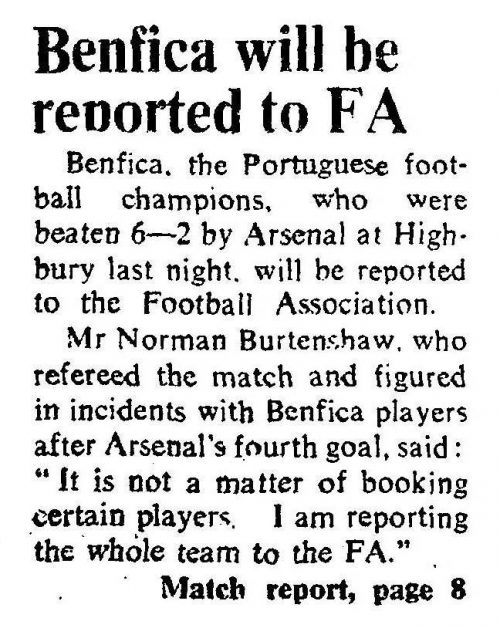 Arsenal rounded the game off with two late goals as Peter Storey scored from the spot after Bob McNab was fouled in the area, and Graham headed in Peter Marinello’s corner in the dying seconds for the sixth.

The large crowd witnessed an authentic, keenly contested friendly between two champion teams, and Eusebio spoke for his team, who were not enamoured with the official, saying after the game: “The referee’s decision changed the course of the game but it was not Arsenal’s fault. The English referees are usually very nice”.

Use the full screen button (four arrows) to view in larger screen. Use the same button to return to this page.

This game was a major factor in Arsenal not playing in the Charity Shield in 1971. Arsenal’s Secretary, Bob Wall, informed the FA in late May that they were unable to fulfil the Charity Shield fixture as they had arranged a number of friendlies instead. As well as the Benfica games Arsenal travelled to Feyenoord, whilst on the same day Leicester and Liverpool played for the Charity Shield, with the Second Division champions beating the FA Cup runners-up 1-0 at Filbert Street.

Although Arsenal took no part in the game, one of their double winners, Jon Sammels, appeared in the winning team in the Charity Shield as he had been transferred to Leicester in the summer.

Arsenal had started a trend as neither the 1972 or 1973 Champions nor FA Cup winners participated in the Charity Shield. The FA promptly moved it to Wembley and attendance by both the League Champions and FA Cup winners was made mandatory.

This Emirates Cup of weekend games acted as a warm up for the Community Shield on 10 August 2014, when we took on Manchester City and added the 13th shield won by The Arsenal.

The European Cup preparation of the matches set both teams in good stead and both Benfica and Arsenal reached the latter stages of the competition, both being defeated by the eventual winners, Ajax.

Arsenal went out to Johan Cruyff’s side 3-1 on aggregate in the quarter-finals, suffering losses in both legs. Benfica met the Dutch champions in the semi-final losing 1-0 on aggregate, with Norman Burtenshaw refereeing the second-leg. Ajax went on to beat Inter Milan 2-0 in the final, with Cruyff scoring twice. 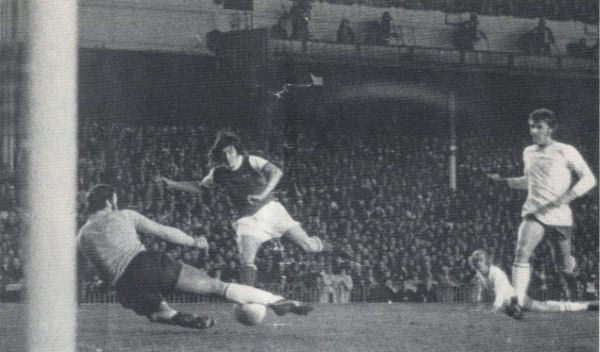 What might have been if Peter Marinello’s shot had gone in?

In the previous decade Benfica showed themselves to be a true giant of the game as they reached five European cup finals in the swinging 60s. They won two of these finals, the first in 1961 beating Barcelona 3-2 and in 1962 defeated Real Madrid 5-3, and on the way to the trophy beat Spurs in the semi- final.

In the 1962 final Puskas scored a hat-trick for Madrid but with the score at 3‑3, Eusebio won the game for Benfica with a second half brace.

Charlie George picked up an injury in the first pre-season friendly at Bournemouth and, consequently, missed the first game at Benfica. After coming on in this match at half-time he was replaced by Roberts after 20 minutes as his right knee locked. He went in for a cartilage operation at the end of the week, and was out of action until the end of September.

Despite the capture of World Cup winner Alan Ball in December, Arsenal’s defence of their title did not pick up from the earlier setbacks and it somewhat petered out as they finished a disappointing fifth place. The title went to Brian Clough’s Derby County.

Benfica on the other hand easily won the Portuguese league by 10 points, only losing once and scoring 81 goals along the way.

The esteem that Eusebio was held in was epitomised by his funeral, which followed three days of national mourning. More than 10,000 fans sang and let off firecrackers at Benfica’s Stadium of Light where his cortege started and the Portuguese Prime Minister led tributes at a Mass in the Seminary Church. Amongst the plethora of football stars that paid tribute to him, perhaps the most fitting was that by an emotional Cristiano Ronaldo who dedicated his Ballon d’Or to him the following week.

Arsenal had met Benfica just once prior to this two-legged affair. Following the title-winning season of 1947-48 the Gunners went on a short tour of Portugal where they won 4-0 in Lisbon but lost 2-3 to Porto. This was considered such an astonishing event that a collection was organised by fans to build a trophy to commemorate the win. The word “build” is not an overstatement as it is believed to be the biggest in world football, standing 2.8 metres high and weighing 115 kilograms!