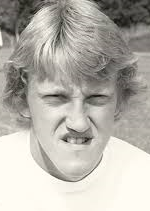 Kevin Stead was the 572nd player to appear for Arsenal.

Born on 2 October 1958 in West Ham and brought up in Custom House.

Kevin played for Newham, Essex and London schoolboys, touring Australia in 1974 with the England Schoolboys. Consequently, he attracted interest from a number of clubs as a versatile player who could operate in defence or attack. However, he deciding to join the Spurs youth set-up, following his elder brother Micky to White Hart Lane, and was signed professionally by Spurs in April 1976

Stead joined Arsenal on a free transfer from Tottenham in July 1977, one of the number of players who came over to the red side of North London following the example of manager Terry Neill. Some record books credit Kevin with having played for Tottenham’s first team, but they have confused him with his brother who played 15 League games for them.

He spent two full seasons at the Gunners, the majority being in the reserves as centre-forward in his first season and full-back thereafter. In total he played 80 Football Combination games, scoring 11 times. He was picked twice for the first team in the 1978-79 season: firstly as a substitute on 14 October versus Wolves, coming on the Molineux pitch for Alan Sunderland in a 0-1 defeat, and a week later he started at home against Southampton on 21 October, coming into the midfield in place of David Price in a 1-0 win.

However, he then went back into the reserves and was released on a free transfer to non-league Oxford City in September 1979. He worked as a taxi driver, driving with, amongst others, ex-team mate and FA Cup winner David Price.