Much of the press comment centred on the team captains, both of whom were Scottish Internationals. Alex James and Hughie Gallagher were schoolboy friends from Bellshill, a Scottish mining town in Lanarkshire.

They had played together for Belshill Academy, despite 18 months difference in age and now were the respective captains of each side. Though they had differing ambitions for the match: James was looking to win the title and get his hands on the trophy, while Gallagher wished to remain in the top flight as Chelsea were just two points above the relegation zone!

Close to kick off Arsenal’s Joey Hulme was declared unfit and was replaced on the right wing by David Jack. Meanwhile Chelsea were without Tommy Law who was replaced in defence by Bob Macauley.

The gates closed early in the afternoon as thousands were locked outside for this important match affecting positions at the very top and lower reaches of the division. Indeed it was the largest League crowd of the season

Chelsea started well but the alert defence of George Male, Eddie Hapgood and Herbie Roberts was too compact to allow any chance to emerge. Then Arsenal, as was their trademark, turned obdurate defence into lightening quick attack and scored first via David Jack who was left unmarked by a disorganised Chelsea defence in the 20th minute.

Chelsea wilted at the back and a couple of minutes later Cliff Bastin scored from a corner that had been needlessly given away by a sloppy Allan Craig back pass which caught out Vic Woodley in goal. Like Jack earlier, Bastin was left alone by the Chelsea defenders for him to easily double the lead with a header.

At the break the game had appeared to run its course with the Champions-elect in a two goal stranglehold, but after a half-time talking to the Blues expanded their play.

Chelsea went on an all out assault soon after the break and Gallagher had the ball in the net but it was disallowed owing to a Chelsea player elbowing Roberts in the back in the build up. Frank Moss was by far the busier of the two keepers in the second half and had to deal with a number of efforts, none of which were overly threatening despite the one sided nature the game had taken.

With Chelsea continuing their focus on attack to the detriment of defence –  with Craig playing as a striker rather than his usual centre half role – either Arsenal were going to counter and put the game to bed or Chelsea would reduce the gap. It was the Gunners who secured the game.

Another counter allowed Ray Bowden to dribble past much of the Chelsea defence and ended with him shooting and it being saved by Woodley. However, Bastin netted after the ball rebounded to him to finish the game off in the 70th minute.

A handball in the area on the 75th minute by Roberts gave the Pensioners a golden chance. But a nervy George Mills’ penalty thundered against the cross bar and rebounded to safety. Gallagher eventually pulled one back from close range five minutes later and held seige to the Gunners goal but they could not breach the red line again.

Arsenal triumphed in a characteristically calculating fashion but the game was closer than the score line suggested with Chelsea belying their perilous league position, especially in the frantic second half.

Arsenal won as their team work was superior, they finished better, and had a far more organised and tight defence. The main playing duel was between Herbie Roberts and Hughie Gallagher. The much taller Roberts totally dominated in the air, but the nimble Gallagher ran Herbie ragged when given the opportunity.

Honours were even at the end of this match within a match, and as they left the pitch a firm handshake between them confirmed their respect for each other. 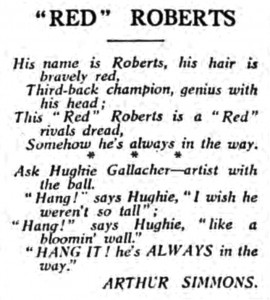 The Gunners, in winning their fifth game in a row, had become Champions of England still with two games left to play.

Asked what he felt were the secrets of Arsenal’s recent success and how they became the strongest and most talked about club in the country in the short time since he led them to their first trophy in 1930, Chapman gave an interview with the Daily Express which appeared on 24 April 1933, revealing these tenets:

“Every individual connected with the club gives of his best and remembers that our motto is: ‘Service before self’

“Clean living, a smart turn out on the field and in the streets, moderation in all their activities are demanded of every Arsenal player”

“There is only one diet rule we impose and that is a light meal of toast and tea, two hours before a match”

“We encourage suggestions from players themselves. Players’ meeting are held regularly, and ideas are welcome on everything connected with the game – the ground, the ball, their ‘togs’, their play”.

“An interest is taken in each man’s home life, his joys and his worries, to such an extent that the wives and relatives become imbued with the Arsenal team spirit. When he is too old to play, the club sees to it that he is found a billet, which will bring him in a livelihood”. 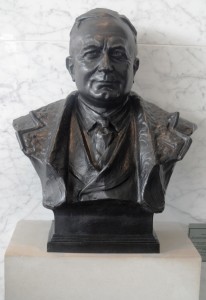 One of the Busts of Chapman

On 10 December 1932 the West Stand was opened by the Prince of Wales.

Alex James did not attend the Championship dinner at Cafe Royal on the 8 May 1933, due to being dropped in the final league game of the season two days earlier.

Just after the league had been won at Stamford Bridge Arsenal had a friendly against Cliftonville in Belfast. James asked to be absent, which for whatever reason had offended Chapman. And in one of their perennial spats he then proceeded to drop James from the final game at Bramall Lane.

This in turn riled James and he, rather petulantly considering his captaincy, did not turn up to the event. The trophy was instead presented to vice-captain, Charlie Jones, at the Cafe Royal by John McKenna the president of the Football League.

This was Alex James’ first season as captain, a role he had taken over from Charlie Jones on 24 February 1933, two months earlier. James as captain would win the League Championship trophy three times, including this triumph, and the FA Cup once before he retired from playing in 1937. 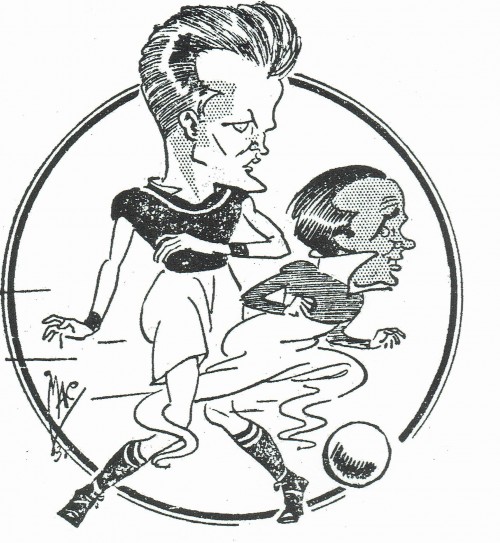 Arsenal were playing only their ninth game in their new red with white sleeved outfits. In the first four games in the new kit they picked up one point. In the next five including this game at Stamford Bridge a full house of ten points was obtained.

Despite not winning in their final two league games Arsenal still finished four points ahead of Aston Villa.

Arsenal were dumped out of the FA Cup in January 1933 by Walsall in arguably the greatest ever shock in the competition.

Earlier in the season Arsenal defeated Chelsea 4-1 and with this win completed the double over their west London rivals. In both this and the next season Chelsea avoided relegation by two points

This was the first in a League winning triple for Arsenal, but sadly it was the last trophy for Herbert Chapman as he passed away mid-way through the next season on 6 January 1934.