When the Austrians came to Highbury.

As it was International week we thought we would dust down an old programme article from last year showing Arsenal playing a national team.

Everyone knows about the battle of Highbury when England, with seven Arsenal players, fought and beat world champions Italy in November 1934.

A lesser known “international” at Highbury occurred on 4 December 1933, just prior to Herbert Chapman’s premature death, when Arsenal hosted an Austrian team who, for matters of FA form, went by the name of “A Vienna XI” or “The Football Club of Austria”, but were to all intents and purposes the Austrian National team, albeit playing a couple of reserves.

In the year previously, Austria had narrowly lost to England 4-3 at Stamford Bridge. This was in the period when Arsenal were the most famous team in the world and in all probability the best in Europe. Herr Hugo Meisl, the visiting Austrian manager, had made it clear that the reason for this pre-eminence was that

“Mr Chapman is undoubtedly the leading man in association football throughout the world.”

The Austrians were on a trip to learn additional skills from the British, and the Austrian team had already held Scotland to a 2-2 draw on their tour, which was part of their build up for the World Cup.

As for the match it was won 4-2 by Arsenal and was witnessed by a crowd of 35,000 on a Monday afternoon, where Arsenal had requested that the supporters arrive at the stadium early as if the light warranted the game would begin a few minutes earlier than advertised. The return to the team of David Jack was well received by the crowd, as was the numbering on the backs of the shirts of each Arsenal player. A peculiarity was that although Arsenal were numbered and easily recognizable the visitors were not. Radio commentary was provided by George Allison, soon to move into the Arsenal manager’s role. In fact the seasoned broadcaster was heard live in the London area, as he described the second-half live.

After a quiet start, incidentally on time, Arsenal opened the scoring with a Cliff Bastin penalty, after he had been fouled in the area in the 40th minute following attacking combination play by David Jack and Alex James. Three minutes later after a defensive slip, Joe Hulme hammered a left foot drive past Peter Platzer to double the lead into the break. The first-half was dominated by Arsenal but the second-half was a far closer and interesting 45 minutes with the Austrians equaling the Gunners’ ball control in the midfield.

After 65 minutes Mattias Sindelar had a deflected shot go in, but almost immediately Jack powerfully headed in a Joe Hulme cross to regain the two goal lead. Then Austria suddenly found their undoubted form as Anton Schall jinked his way into the area to shoot past Frank Moss to reduce the arrears. A quarter of an hour of persistent attack on the Arsenal goal was expertly defended, with the best chance falling to left-back Karl Sezsla who hit the crossbar, only for Cliff Bastin to break away from an Alex James pass to finish off the match for Arsenal’s fourth goal.

After the game Hugo Meisl acknowledged Arsenal’s dominance and said:

“The Arsenal’s victory has made us feel that club strength in Britain is greater than international strength”.

He also noted that his team would need to play more openly and faster with a better covering defence in future. Cliff Bastin felt the Austrians played “perfect exhibition football” whose only downfall was an inability of their forwards to apply the trigger when needed after the excellent neat midfield passing movements had created chances. 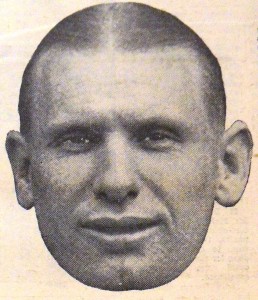 Later in the evening the event was rounded off by a dinner in honour of the Austrians at the Café Royal, which was full of bonhomie engendered by the sporting contest. Sadly and indeed tragically, a far less convivial Austrian ensured that these sporting friends were at war by the end of the decade. 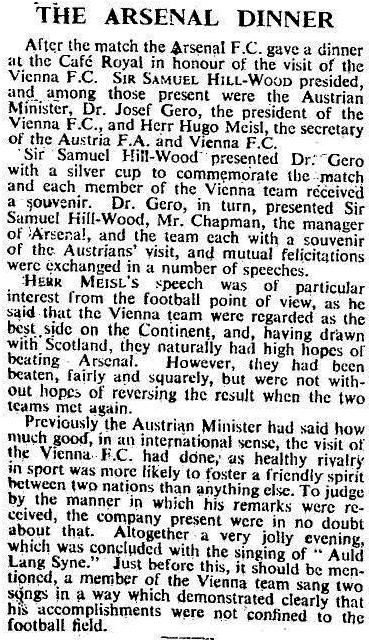 The after match dinner as noted in the Times

Later on their tour, though to noticeably far less fanfare and newspaper columns than given to the Arsenal match, the Austrians lost by the same 4-2 scoreline against Liverpool, and for their final match they were beaten 3-0 by Manchester City in front of 15,000. It was evident in both these games that Cliff Bastin’s comment about the Austrians lack of shooting prowess was re-visited. However, despite these deficiencies this trip obviously provided their management with valuable knowledge as Austria reached the semi-final of the World Cup in the 1934 tournament.

This match is just one of the many contests held at Arsenal of an international nature over the club’s long history, and a full list of these games can be found here.

As you know we have been reproducing our programme work on the blog this season. This one originally  appeared in last season’s Champions League 2nd Round tie against Bayern Munich. You can probably guess the one line that we did not include in our copy to the Editor!